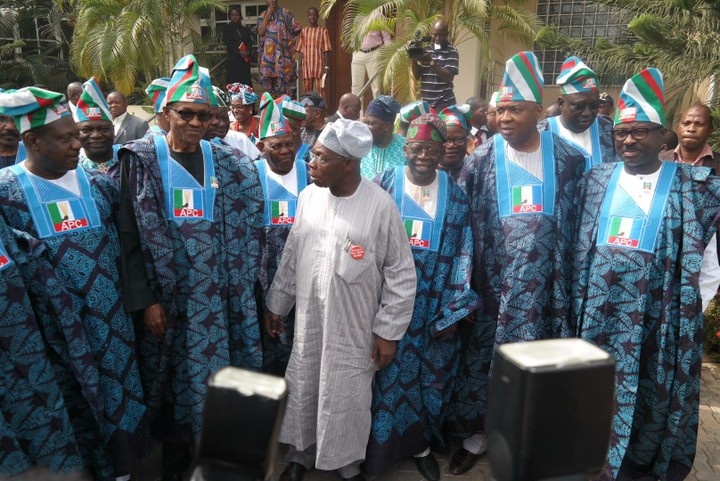 A former military administrator of Lagos State, Prince Olagunsoye Oyinlola, has revealed how former President Olusegun Obasanjo stopped the National Leader of the All Progressives Congress (APC), Asiwaju Bola Tinubu, from becoming the running mate to President Muhammadu Buhari in 2015.

Speaking in an interview with The Punch, Oyinlola, a former Osun State governor, claimed that there was already an agreement between Buhari and Tinubu that they would be presidential and vice-presidential candidates respectively.

The Peoples Democratic Party (PDP) stated that the deal between the duo was initially hidden from most party members.

He said the agreement between Buhari and Tinubu led to some uneasiness in the party as they feared that a Muslim-Muslim ticket could cost the APC victory in the election, given the near-equal population of Christians and Muslims in the country and the sensitivity that surrounds religion issues in the country.

According to Oyinlola, if not for Obasanjo’s intervention, the APC would likely have gone ahead with the Muslim-Muslim ticket and the party could have found it difficult to displace the government in power, mostly when all reservations that surfaced over the proposed Muslim-Muslim ticket had been dismissed.

He added, “The agreement was concealed from a good number of the party leaders until it surfaced after Buhari had got the ticket. Then the rumour came out and some us felt danger was looming with the Muslim-Muslim ticket idea. To further add to our fears, General Buhari on one occasion said there was nothing wrong in the Muslim-Muslim presidential arrangement, saying after all he governed with Tunde Idiagbon.

“That statement made us know it (the Muslim-Muslim idea) was a fact. On two occasions, Bola (Tinubu) mentioned it in my presence that they agreed. If you recall one trending video back then, where it was said that Buhari had jettisoned what they agreed on, that is the room he was sleeping when Buhari was looking for the post.

“We then told Baba (Obasanjo). We told him that taking power from an incumbent government was a tough task and we must not give room for excuses and miss the target. We told him they (Buhari and Tinubu) were thinking of a Muslim-Muslim ticket. That was when Baba (Obasanjo) said people should not take the sensibilities of Nigerians for granted.”

He said after Obasanjo’s intervention succeeded in changing the decision, some people started spreading the news that Obasanjo frustrated the plan to make Tinubu the vice-presidential candidate.

He added, “After that (Obasanjo’s intervention), they started saying it in my presence that Obasanjo frustrated the plan to get Tinubu on the ticket for 2015 but I always acted as if I didn’t hear them. We then had a stakeholders meeting where the issue of the running mate was discussed again.”