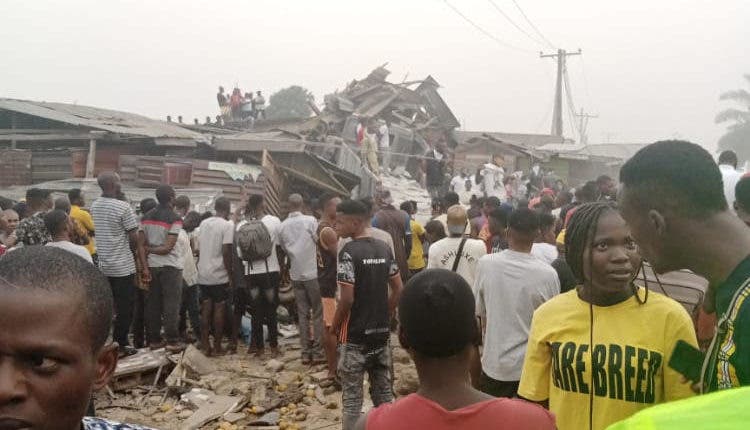 Some angry youths in Akungba-Akoko have revealed why they prevented a state government delegation from entering the community on Sunday.

Naija News had reported a truck belonging to Dangote Group crushed some students of the Adekunle Ajasin University, Akungba-Akoko (AAUA) in Ondo State to death.

It was gathered that the sad incident occurred at about 6 pm near the entrance gate of the university on Saturday evening.

The truck loaded with bags of cement crushed passersby, students, and traders before ramming into shops opposite the university. Sources said the driver of the truck lost control due to brake failure.

Speaking with reporters, one of the youths in Akungba said the government delegation was barred from entering the community because the state governor, Rotimi Akeredolu, failed to visit the scene of the incident.

The youth leader stated the angry youths and students stopped the delegation at Iwaro junction, in Akungba Akoko.

He also faulted Akeredolu for sending his Chief of Staff, Olugbenga Ale, and the Pro-Chancellor of Adekunle Ajasin University, Dr. Tunji Abayomi to assess the situation.

According to him, the state government had neglected the community as no effort was made to curb incessant road accidents in the community.

He disclosed that the state Commissioner of Police, Bolaji Salami, was allowed to enter the town with his security aides, while the government delegation returned to Akure.

Meanwhile, the management of AAUA has shut down academic activities in the Institution indefinitely.

This is coming after an accident caused by a truck belonging to Dangote Group claimed the lives of some students of the institution.

It was revealed that the institution decided to close the school due to the rising tension among students and indigenes of the community over the allegation that the state government has failed to attend to the issue causing the road accident.

The Acting Registrar of the Institution, Opeoluwa Akinfemiwa, in a circular directed students to leave the school premises by 6:00 pm on Sunday.

The circular read “Further to our circular of Saturday 23rd January, 2021 and the attendant protest by students on Sunday, 24th January, 2021, the Acting Vice Chancellor, Adekunle Ajasin University, Akungba Akoko, Prof Olugbenga Ige, on behalf of Senate, has directed that the University be closed with immediate effect until further notice.”

“All students are therefore advised to vacate the campus latest by 6pm today, Sunday 24th January, 2021.”