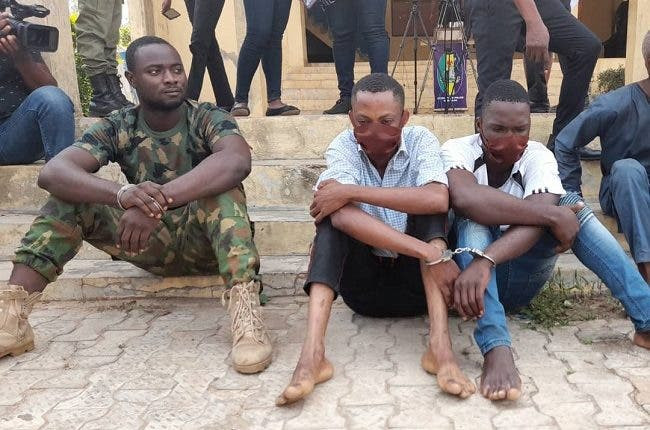 In what appears to be a national embarrassment, a police constable and a serving Nigeria army personnel have been nabbed for their involvement in a robbery operation in Ondo State.

A report reaching Naija News at this time confirmed that the culprits, David Friday (police) and Innocent Victor (a soldier) met their waterloo at Ojadale junction in Idanre where they attacked their victims and deprived them of their belongings including money.

Though the soldier had denied his involvement in the reported crime, insisting that he was not caught at the scene of the incident but was held for being on illegal duty.

Confirming the report to newsmen on Thursday, January 21, the state Police Commissioner, Bolaji Salami, revealed that the police constable is attached to Olofin Police Station in Idanre local government area of the state while the soldier is serving with the 32 Artillery Brigade, Nigeria Army, Owena Cantonment, Akure.

It was revealed that the two suspects were fully armed with all sorts of dangerous weapons while some items were reportedly stolen from their victims were found on them. Items recovered from the duo include N6,000, one Itel phone valued at N8500, 30 litres of petrol and the sum of N125,000.

“He was being tried for that motorcycle theft when he was caught conspiring with a soldier to rob some people with a dagger. We paraded them and the victims identified them,” the PC stated.

He added: “They attacked and robbed the following people, Akinmodun Akinleye and Adeyeye Sesan of their properties which include cash sum of Six Thousand Naira Only (?6,000.00), one Itel phone valued Eight Thousand Five Hundred Naira Only(?8,500.00), 30 litres of petrol and cash of one hundred and Twenty Five Thousand (?125,000.00)”

“Suspects were subsequently arrested and have made confessional statements to the commission of the crime. They will soon be arraigned in court. Other victims came and identified them. When we are done with our investigation, we will charge them to court.”

Meanwhile, the Kwara State Command of the Nigeria Police Force has revealed how its officers deposited N20,000 to an account to show interested in joining a planned nude party in Ilorin, the state capital, Naija News reports.