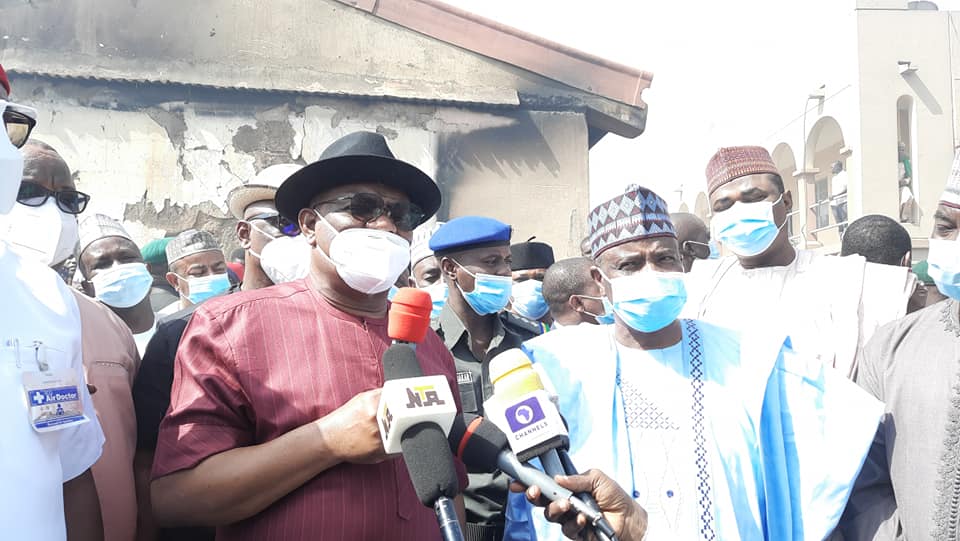 Governor Nyesom Wike of Rivers State has revealed why he donated N500 million to the Sokoto state government.

Naija News had reported that the Sokoto central market was on Tuesday morning gutted by fire. It was gathered that the fire which started around 7 am was caused by a generating set.

The fire destroyed many shops and goods worth millions of naira.

In a statement issued on Wednesday, the Media Aide to Governor Aminu Tambuwal of Sokoto, Muhammed Bello, said Wike donated the money to support the state’s rebuilding efforts of the market, and also to support the victims of the inferno.

Bello said Wike made the pledge when he visited the state to condole with the government and people of the state over the incident.

According to Bello, Wike was shocked and disturbed when he learned about the inferno and when Tambuwal showed him around the scene of the incident.

The statement reads: “The River state government has pledged the sum of half a billion naira to support Sokoto State government in rebuilding the Sokoto central market ravaged by fire on Tuesday morning.

“Part of the money, according to Gov. Ezenwo Nyesom Wike of Rivers State, who made the pledge, is also intended to support the victims of the inferno.

“Gov. Wike, who visited Sokoto earlier on Wednesday, barely 24 hours after the disaster, said he was shocked and disturbed when he learnt about it.

“Affirming that whatever affects Sokoto State also concerns Rivers, he said his administration will do all it takes to ensure that the affected market is reconstructed and becomes functional.

“He said a situation where the means of livelihood of the people of Sokoto state, the drive of the government to improve the people’s lives and a broad spectrum of socio-economic wellbeing of many people will be affected, does not augur well for development and progress.”

He lamented the huge negative effect the incident would have on the economic well-being of those affected by the fire.

Reacting to the incident, the President in a statement by his Media Aide, Garba Shehu, directed federal aid agencies to respond to the urgent needs of the victims of the disaster.

He also urged market authorities to train traders and facility managers on basic safety precautions to forestall the frequency of fire outbreaks.