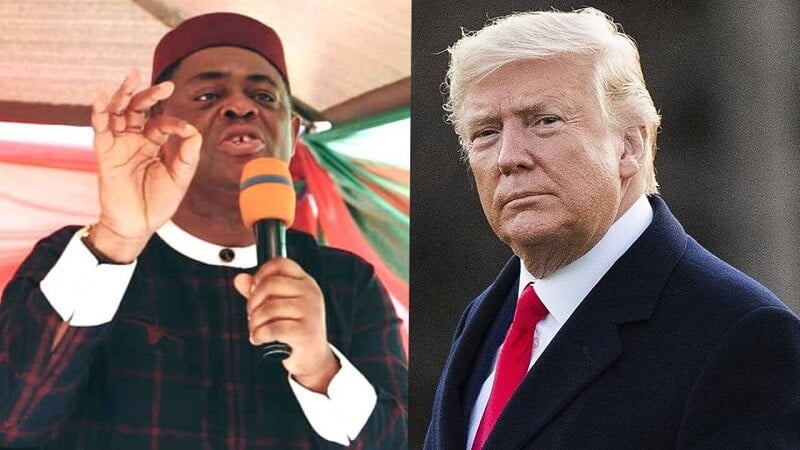 Naija News reports that President Trump’s tenure would end today, as Joe Biden will be sworn in as the 46th president of the US.

In a post on Twitter reacting to Trump’s farewell speech, Fani-Kayode stated that the embattled 45th US President stood against evil.

He wrote: “You stood against evil, fought a good fight and shone your light upon the world.

“No-one can take that from you. Proud of you: now and always.

Trump in his farewell speech on Tuesday, listed his administration’s accomplishments in politics, economy, health and security.

In his farewell speech from the White House, Trump thanked Americans for their support and cooperation during his four-year tenure as president.

While not mentioning Joe Biden’s name, the US president urged the incoming administration to ensure that America doesn’t lose the respect it now has.

Trump said: “Incomes soared, wages boomed, the American Dream was restored, and millions were lifted from poverty in just a few short years. It was a miracle. The stock market set one record after another, with 148 stock market highs during this short period of time, and boosted the retirements and pensions of hardworking citizens all across our nation. 401(k)s are at a level they’ve never been at before. We’ve never seen numbers like we’ve seen, and that’s before the pandemic and after the pandemic.

“We rebuilt the American manufacturing base, opened up thousands of new factories, and brought back the beautiful phrase: ‘Made in the USA’.”

Trump stated that the key to national greatness lies in sustaining and instilling our shared national identity, stressing that that means focusing on what Americans have in common: “the heritage that we all share”.

“At the centre of this heritage is also a robust belief in free expression, free speech, and open debate,” he added.