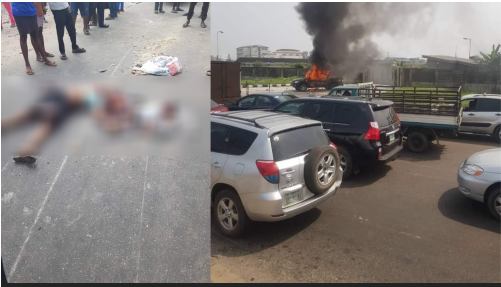 Policemen attached to the Ebrumede Division has been accused of killing a woman and her child while they were trying to arrest some suspected Internet fraudsters.

The development has seen angry protesters march through streets in Warri, Delta State to call for justice.

According to SaharaReporters, the woman and her daughter were crushed to death by the policemen who drove recklessly while trying to apprehend Yahoo boys.

Eyewitnesses who spoke on the incident disclosed that the police vehicle hit a tricycle the mother and child were in, killing them on the spot.

It was reported that the policemen having seen what happened escaped from the scene, while their patrol van which was left in the scene was set on fire.

One of the witnesses said, “The policemen were pursuing some Yahoo boys and the police van rammed into a Keke (tricycle) with a woman and child who died on the spot. The policemen escaped immediately when they saw that a crowd was coming after them. The police left their Hilux van and escaped from the scene. The crowd set ablaze the Hilux van during the protest.”