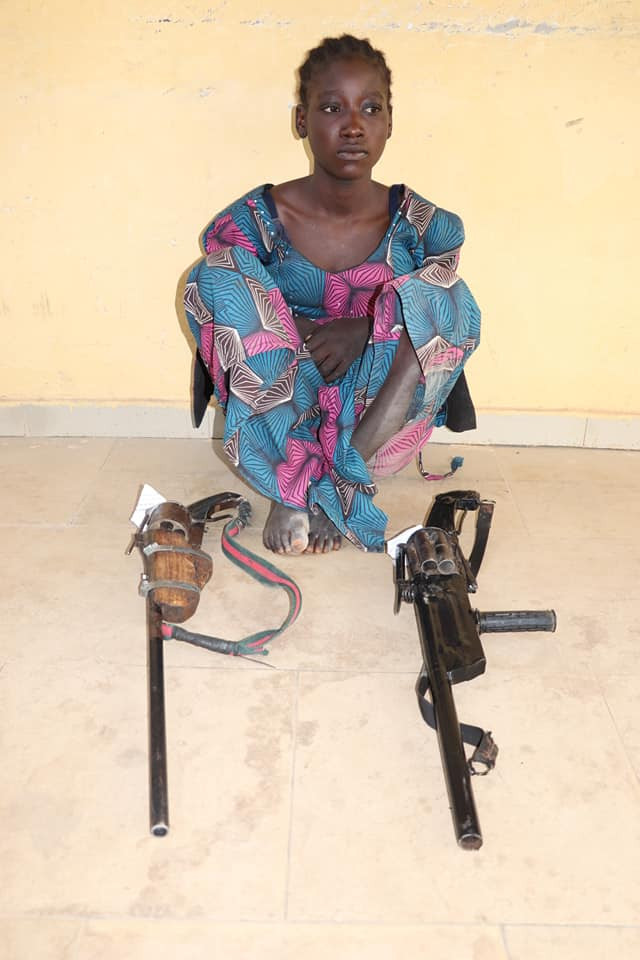 The suspect was arrested along with her male partner on Wednesday, 13th January 2021 along Bangi/Wamba road according to a statement on Monday from the State Police PRO, ASP Wasiu Abiodun.

The statement added that the male suspect attempted to escape after arrest and was gunned down which eventually resulted in his death.

Two locally fabricated revolver rifles were found in the possession of the suspects when they were arrested by the Police in Mariga Local Government Area of the state.

“On 13/01/2021 at about 1700hrs, a team of Police operatives/vigilante attached to Bangi division while on routine patrol along Bangi/Wamba road arrested two suspects; one Haruna SNU ‘m’ and Maryam Sani age 16yrs ‘f’ both of Magami village via Gussau Zamfara State with one unregistered Bajaj m/cycle, and two locally fabricated revolver rifles,” said Abiodun.

Meanwhile, an Ekiti State High Court on Monday sentenced an assistant commissioner of police, Okubo Aboye to life imprisonment for buying a vehicle stolen by kidnappers.

The court, which was presided over by Justice John Adeyeye also condemned a mechanic, Niyi Afolabi from whom Aboye bought the vehicle (a Hilux van) to life imprisonment as well.

The Judge ruled that the accused were both aware the vehicle was stolen property hence it will be wrong of the law not to punish them for the offence.

Earlier, the investigating police officer had told the court that the vehicle was traced to Aboye’s house who confessed during interrogation that he bought the car from his mechanic who got it from kidnappers.

The offence was committed “on or about the 9th -19th day of May 2005 at GRA, Ado Ekiti. The kidnappers then armed themselves with guns and kidnapped one Moses Ajogri 40 and robbed him of his Toyota Hilux van with Reg. No. APP 509 BK.” the charge sheet noted.

Content provider, creative writer, inspired by the opportunity to learn new things. You can reach out to me via [email protected]naijanews.com