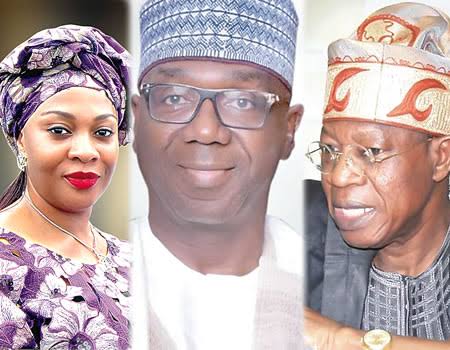 The National Caretaker Committee of the ruling All Progressives Congress (APC) has initiated moves to reconcile three chieftains of the party in Kwara State.

Naija News reports that the State Governor, Abdulrahaman Abdulrazaq; the Minister of Information and Culture, Lai Mohammed, and the Minister of State for Transportation, Senator Gbemisola Saraki, have been at loggerheads over the control of the party in the state.

The crisis in the party reached its peak when the APC caretaker committee removed the state Chairman, Hon. Bashir Bolarinwa, who is a loyalist of the two ministers and replaced him with his deputy, Samari Abdullahi, who is said to be loyal to the governor.

A group of APC leaders loyal to Mohammed and Saraki had protested the removal of Bolarinwa after a meeting in Abuja with the National Secretary, Senator John Akpanudoedehe.

The group also kicked against the issuance of a letter of appointment to Abdullahi as the acting chairman of the party in the state.

But in a swift reaction,  governor Adulrasaq’s loyalists described Mohammed and Saraki as paper-weight politicians with no electoral value.

They also declared support for the APC national caretaker committee on the removal of Bolarinwa.

However, the APC leadership has convened a peace meeting in Abuja for today to resolve the crisis between the two warring factions, THIS DAY reports.

This news platform gathered that the peace meeting will be chaired by the governor of Yobe and interim chairman of the party, Mai Mala Buni.

It was said that the meeting would afford the APC leadership to intervene and resolve the crisis between the chieftains and their supporters.