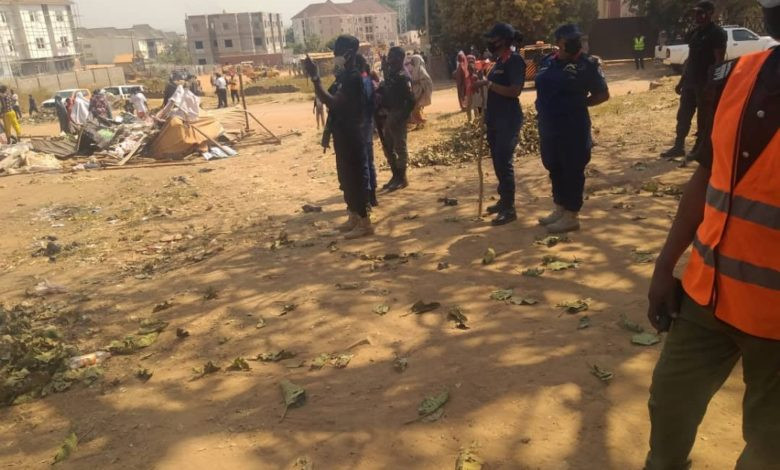 The Federal Capital Territory Administration, FCTA, has in a bid to curtail the spread of COVID-19 disease wrecked down local wrestling and viewing centres.

Naija News understands that the FCT Ministerial Enforcement Taskforce on Tuesday, January 12 in a joint operation with officers of the Nigeria Police Force, State Security Services (SSS) and the Nigerian Security and Civil Defence Corps (NSCDC), pulled down no fewer than five local wrestling and drama theatres within the city.

The wrestling centres popularly known as “Gidan Dembe” in the Hausa language, were demolished for violations of COVID-19 safety protocols.

Naija News understands that the authorities wrecked down the reported centres located at Dakibiyu, Gwarimpa 1 and Sector Centre districts after failing to adhere to several warnings.

Speaking to reporters at the demolition exercise, Ikharo Attah, the Head, Media, Public Enlightenment and Advocacy of the FCT Ministerial Enforcement Taskforce, said the exercise was carried out following repeated warnings to the owners of the Gidan Drama and Gidan Dembe to stop operations because “they are prohibited to do so under the COVID-19 Protocols and Guidelines”.

He noted that “Thousands of people gather in these local entertainment centres to watch artistes and wrestlers perform. In one of the centres, we observed during surveillance that thousands gather to watch nude dancers. Facemasks, physical distancing and sanitizing of the hands do not exist here at all.”

Attah warned that the authority would not hesitate to arrest any Kannywood actor or actress caught at any of such theatres.

He said: “If we get them here we will arrest and charge them to court regardless of their fame and status. The task force chairman also urged those patronising the centres to desist from doing so if they hope not to contract the dreaded virus.”

“Most of the commercial drivers arrested carried too many passengers and overloaded their vehicles in contravention of the COVID-19 Transportation Guidelines and Protocols,” Attah said.

He disclosed that one of the drivers who identified himself as Garba was sentenced to one-week imprisonment for assaulting police personnel attached to the taskforce and ramming his car into a police van while trying to evade arrest.

Meanwhile, the Federal Government of Nigeria has stated that it is working on the type and quantity of COVID-19 vaccines to procure.

Naija News reports that this was stated by the Minister of Finance, Budget and National Planning, Zainab Ahmed.