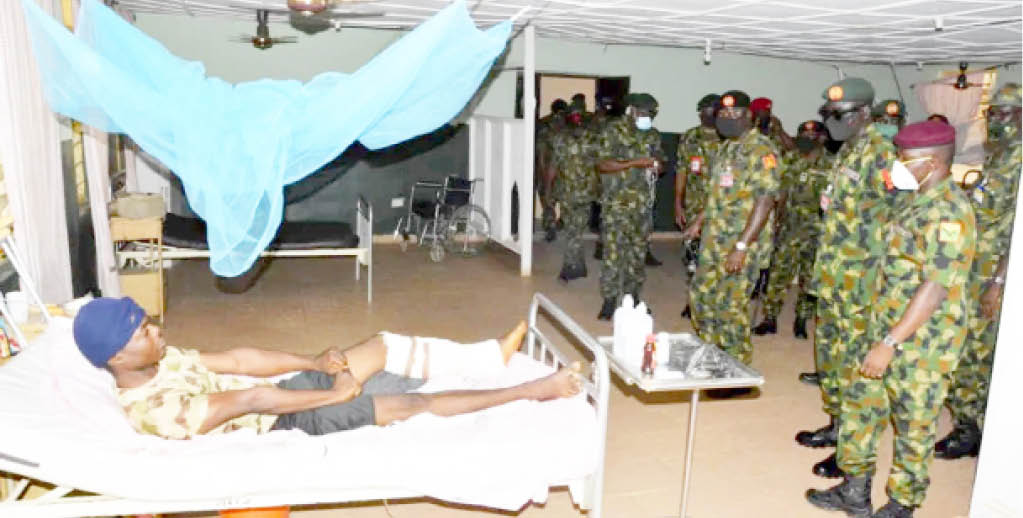 Some Nigerian soldiers injured in the line of duty have accused the military authorities of neglect and non-payment of their allowances.

The soldiers made this known in an interview with Daily Trust on Friday. According to the soldiers, they have not been paid the special disability compensation they are entitled to and denied promotions their peers enjoyed

Other wounded soldiers alleged that civilian patients were given preferential treatment at the 44 Army Reference Hospital in Kaduna.

A soldier, who was paralysed from the waist down by an insurgent’s bullet in the North-East, said he had not received any disability compensation, but his salaries have been promptly paid.

Now confined to a wheelchair, the soldier said his dream and that of his family had been shattered as his expectations in life may no longer be met.

Though he is recovering, he still suffers from severe pains.

Another soldier, injured three months after his wedding during a training exercise when he was accidentally shot, said he had been in constant pain since the incident, and has been unable to function sexually.

After the incident, he was first treated for months in Maiduguri before being transferred to the 44 Nigerian Army Reference Hospital, Kaduna, where he was treated for another four months.

“I feel a burning pain constantly in the injured leg, and when I walk, a nerve pain is triggered as if I were stepping on sharp nails,” he said.

The soldier now worries about the long-term effects of the injury, saying, “I limp on my left leg as a result of the injury, and it will be difficult for me to walk normally again.”

He said two of his complaint letters, written separately to the commanding officer of his unit, were turned down, but another one had been sent to the army headquarters.

The soldiers, however appealed to the Federal Government, as well as military authorities, to look into their plights and improve their treatment so that they would return to their duties.

“We protected the territorial integrity of the country as best as we could while we were on the field in Maiduguri, the Borno State capital, where Boko Haram insurgents attacked us.

“Unfortunately, we are not being supported the way we ought to by the government,” one of them said.