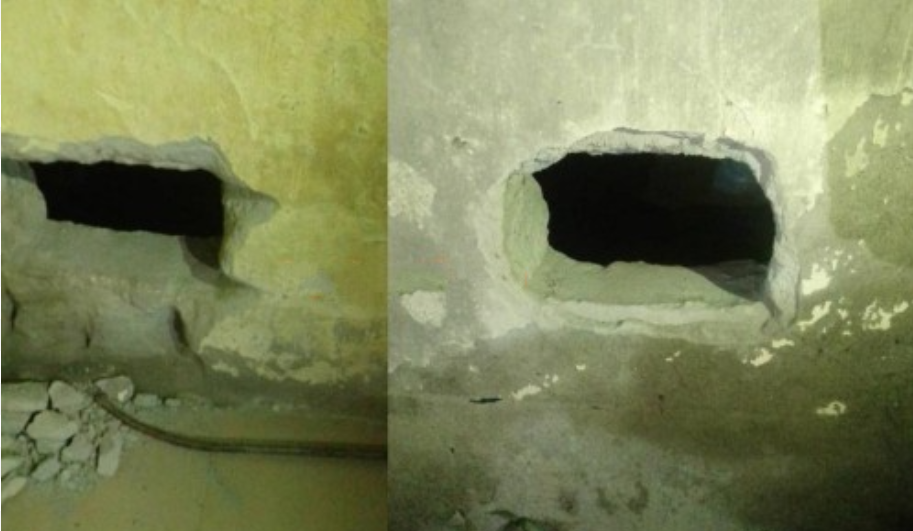 Two notorious suspected drug dealers, a Nigerian and his Ghanaian counterpart have reportedly escaped from their prison cells where they were kept in Abokobi Police Cells near Adenta in the Greater Accra Region of Ghana.

27-year-old Nigerian identified as Chukuda Onyabu and his 26-year-old Ghanaian counterpart Emmanuel Osei both escaped from their cell by scraping a portion of the wall and removing the block before escaping.

The two suspects who had been arrested for possession of narcotic drugs and conspiracy to commit crimes and stealing were detained in prison custody and awaiting the next court date.

Naija News understands they used an iron rod from the ventilation hole in the bathroom to scrap the wall, create a hole large enough to accommodate them, and then escaped.

The jailbreak was discovered by prison officials on January 1, 2021.

A manhunt has been initiated for the two escapees with a view of re-arresting them.

Earlier, this online news platform reported that a prisoner who escaped from Edo State during the #EndSARS protest, Obehi Ogbeh, has been arrested by men of the Ogun State Police Command in Ifo Local Government Area of the state.

Ogbeh who escaped from the white house prison yard in the state last year was apprehended on Tuesday in the state while wandering about.

The development was disclosed by the spokesperson of the command, DSP Abimbola Oyeyemi, on Wednesday.

Oyeyemi while speaking on the development noted that the prisoner was arrested following information received by policemen at Agbado divisional headquarters that a middle-aged man was seen around Angulis area of Agbado with a suspicious look and conduct.

Meanwhile, a Nigerian actor and producer, Omogoriola Hassan, has been installed as the new king of Uba land, Imobi Kingdom in Ogun State.

Oba Omogoriola disclosed this on his official page on Instagram with a video that captured the moment chiefs of the town made an Ifa consultation to confirm his installation.

He noted that the consultation became necessary as many have now resorted to using money and influence to snag traditional titles.

The new monarch, however, thanked God ALmighty, his family, and friends who supported him during his coronation as the new monarch of the kingdom.