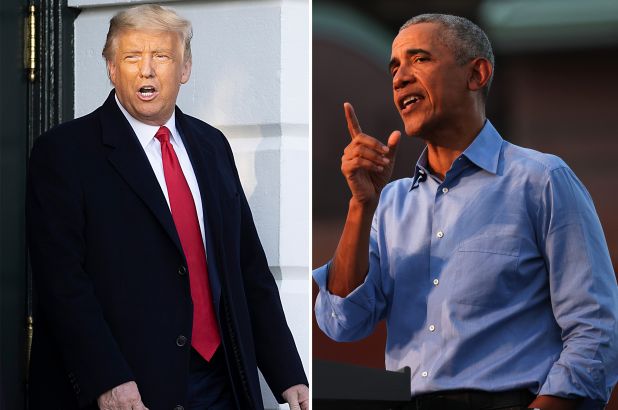 Former President of the United States of America, Barack Obama has slammed incumbent President Donald Trump over a chaotic event that happened on Wednesday.

Naija News understands that a violent protest erupted in America after the sitting president while addressing his followers on Wednesday, vowed never to concede defeat to Democrat, Joe Biden.

Recall that Biden had defeated the Republican in the election conducted in November 2020.

However, Trump has consistently declared himself the winner of the US Election 2020. Alleging that the election results were manipulated.

In his reaction to the Capitol Hill violent protest in a statement, Obama labelled Trump as a shame for America.

The former US leader continued to say that history will remember the incident “incited by a sitting president who has continued to baselessly lie about the outcome of a lawful election, as a moment of great dishonour and shame for our nation”.

“We’d be kidding ourselves if we treated it as a total surprise”, Obama said.

He added that for two months, “a political party and its accompanying media ecosystem has too often been unwilling to tell their followers the truth”.

According to him, the Republicans have refused to admit that the November 3 battle at the poll was not a particularly close election and that President-elect Joe Biden will be inaugurated on January 20.

“We’re seeing the consequences, whipped up into a violent crescendo. Republican leaders…can continue down this road and keep stoking the raging fires or choose reality and take the first steps toward extinguishing the flames,” said Obama.

However, Obama applauded some members of Trump’s party for speaking against the assault on America’s legislature.

In another news, the All Progressives Congress has been warned by Rivers State Governor, Nyesom Wike, not to fight when its time to handover to the Peoples Democratic Party in 2023, Naija News reports.