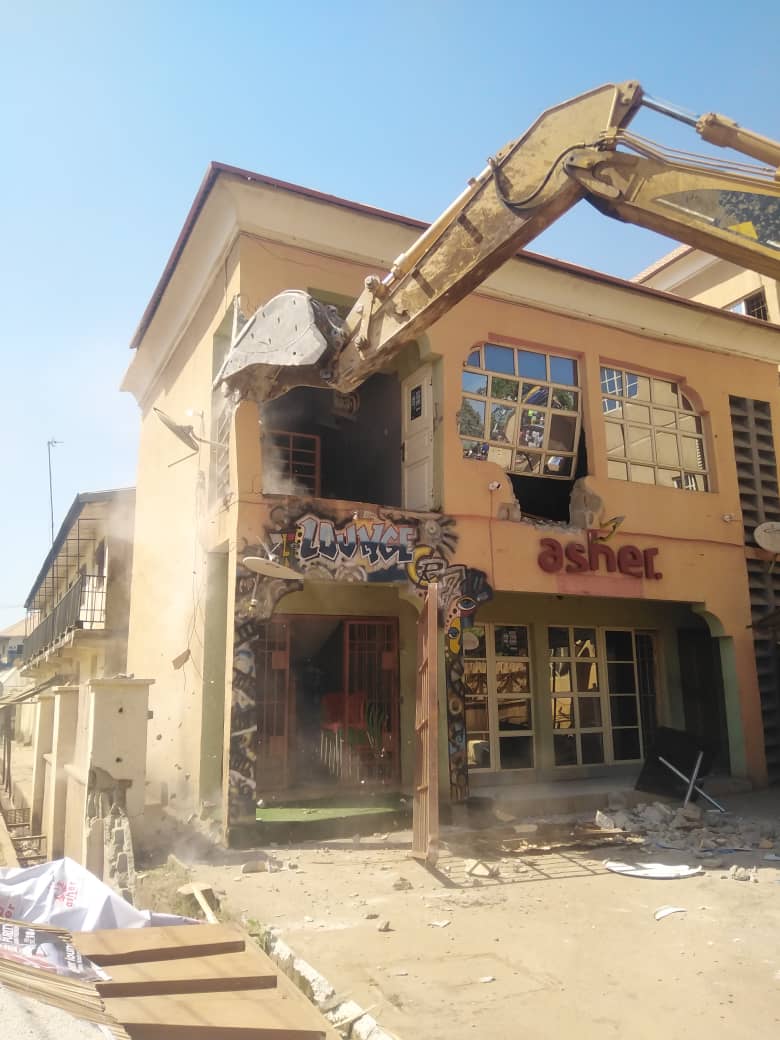 The Director-General of the Kaduna State Urban Planning and Development Agency (KASUPDA), Ismail Umaru-Dikko has given more explanations on events that resulted in the demolition of Asher lounge.

Dikko in a statement on Tuesday said the building, located in Barnawa area of the state was demolished after it was discovered that it had no valid title or development permit.

Naija News recalls the building was demolished after it emerged that there were alleged plans to use the outfit in hosting a sex party.

The KASUPDA boss, however, acknowledged that the handler of the agency’s Twitter handle erred by directly linking the building’s demolition to a planned sex party.

He added that reports of a covid-19 violation by the building prompted further investigation by the agency which led to the discovery that the building is operating illegally, hence the demolition.

He noted that the illegal status of the building resulted in the enforcement and demolition action that was carried out by the agency.

“Since this enforcement action, much of the commentary on the matter has centred on the inaccurate statement from KASUPDA’s Twitter account.

“While regretting the inaccuracy of the handler of our social media account, there is no reservation about the steps taken pursuant to enforce the laws and regulations of Kaduna State on a property that was in violation of its provisions.

“Since 26th March 2020, the Coronavirus Disease (COVID-19) Partial Lockdown Order, 2020 have been in force in Kaduna State. Although some of the regulations were significantly relaxed in June 2020, they were tightened again in December 2020 in response to the second wave of Covid-19 infections.

“Indications that an activity in violation of the Covid regulations was planned to be held in Asher Lounge drew attention to the property and made it necessary to examine the status of the building.

“Once due diligence revealed the illegal status of the building, there was need for enforcement action without the notification requirements that the law compels for holders of valid title and development permits.

“The illegal status of the building became a very separate matter from the trigger event: the third-party elements who had planned and advertised an unlawful gathering on those premises.”

Meanwhile, following the demolition of Asher Lounge, the owner and operator of the business, Aisha Yakubu has taken legal action to sue the Kaduna State government to court for the illegal demolition of her outfit.

She said on December 27 the VIP lounge was booked for an event where a customer wanted to show appreciation to his own customers for patronising him and not to host an illicit party.

Yakubu said on the day of the demolition of her property no prior notice was given, adding that she lost a month-old pregnancy because of trauma.

Yakubu added that she would be seeking legal redress for defamation of her character and the loss of her properties in the building, noting that her business was registered at the Corporate Affairs Commission (CAC) as a restaurant and an event centre — not a hotel.