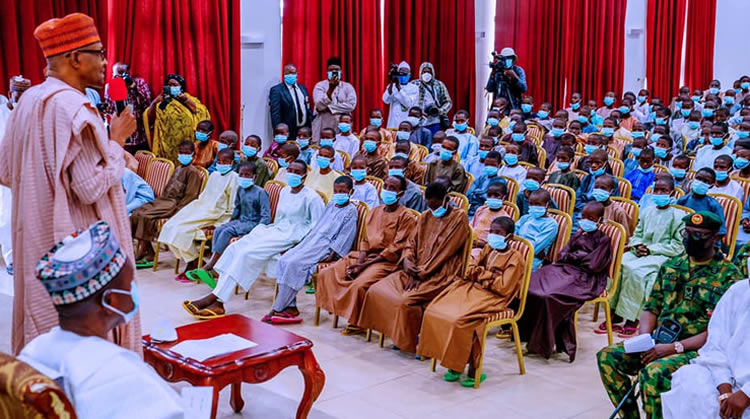 Nigeria President, Muhammadu Buhari, is currently in a meeting with the students of Government Science Secondary School, Kankara, in Katsina State.

Naija News had earlier reported that the abducted students were released on Thursday evening, a development which was confirmed by the state Governor, Aminu Masari.

The student after their release on Thursday were taken to the state on Friday morning amidst tight security.

Buhari reiterated his determination to provide security for all in Nigeria.

The president, who spoke in Hausa, congratulated the children for their safe return.

He stressed that the government would continue to improve the nation’s security system.

Governor Aminu Masari, in his address, told the President of the traumatic experiences the students had in the hands of their abductors.

He said, “These students returned barefooted. None of them wore any sandals while they were being brought here.”

Meanwhile, the debriefing of the students is expected to begin on Saturday.

President Buhari’s Personal Assistant on New Media, Bashir Ahmad, had earlier tweeted that his principal would be meeting with the abducted Schoolboys.

Nigerians in the past few days had called out the President for initially refusing to visit the school where the students were kidnapped.

The Minister of Information and Culture, Lai Mohammed, at a press conference on Friday, said although the President did not visit where the students were abducted, he coordinated rescue efforts from his hometown, Daura.

When asked why the President failed to visit Kankara despite that he was in the state as of the time of the abduction, the minister said, “Yes, the president did not visit the town but he was busy coordinating the entire operation to ensure the safe return of the students within the fastest time possible.”