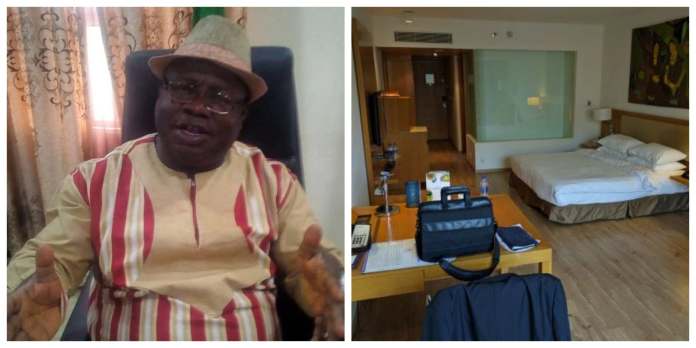 The management board of the Federal Polytechnic in Ede, Osun State has temporarily removed the institution’s rector for turning his office into a home.

Naija News understands that the board suspended Mr John Adekolawole after a bed was found in his office.

Chairman, Academic Staff Union of Polytechnics, the institution’s chapter, Mr Adekunle Masopa while speaking on the incident noted that the board based its strict decision on 21 grounds, which include sleeping during office hour.

Masopa who spoke after an emergency congress of the union revealed that a position paper was handed ASUP by the board shortly after its meeting. He said the board accused Adekolawole of ‘desecrating the respected office of the rector with the creation of a bedroom furnished with a king-size bed which has made it possible for him to be ”sleeping at work.”

His statement reads: “We tried to intervene, but members of the academic board said they had taken a decision and that their decision would stand.

“They, however, said a position paper would be communicated to us. The said position paper has been communicated to us. The following are some of the reasons adduced for the action: one, flagrant dereliction of duty by absconding from office for about a month. Two, the desecration of the highly respected office of the rector with the creation of a bedroom furnished with a king-size bed which has made it possible for him to be sleeping at work.

“Improper improvisation of dual award programme of National Diploma plus NCE (Nigeria Certificate in Education) programme in collaboration with a consultant.”

In another news, Naija News reports that the chief justice of Nigeria, Ibrahim Tanko Muhammad is rumoured to be unwell having failed to attend the swearing-in ceremony of Nigeria’s 72 new senior advocates.

The 66-year-old chief justice has not been seen in public for a long time. The swearing-in ceremony of the top lawyers, which was held in the Supreme Court, was a great success.