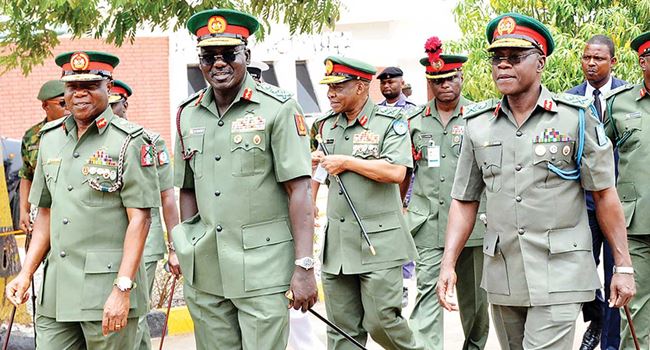 The Nigerian Army has confirmed that more top military officers have tested positive for the coronavirus infection.

The Acting Director of Army Public Relations, Brigadier-General Sagir Musa confirmed the number has risen to 26 when he noted on Sunday that 417 personnel have undertaken the coronavirus test.

This follows the tests conducted after the General Officer Commanding (GOC) 6 Division, Major General Olu Irefin contracted and later died from the virus infection while attending the Chief of Army Staff Annual Conference 2020 in Abuja.

It will be recalled as earlier reported by Naija News that not less than 18 top officers of the Nigerian Army have tested positive for COVID-19 following the breakout of the virus during the aborted 2020 Chief of Army Staff Annual Conference.

However, the number has now increased based on the update given in a statement on Sunday by Army spokesman, Musa who however did not disclose the specific ranks of the infected persons.

“On the confirmation that Gen Irefin’s COVID19 test was positive on 9 December 2020, the Chief of Army Staff directed the immediate suspension of the conference and all participants were directed to move into self isolation in line with FGN protocols on COVID 19 pandemic.”

“Equally, comprehensive testing of all participants commenced immediately. Consequently, as at Sunday the 13th of December 2020, a total of 417 personnel have so far been tested with 26 confirmed positive cases. Currently, all participants are in self isolation irrespective of their results while Nigeria Centre for Disease Control recommended COVID-19 treatment drugs were immediately issued to those that tested positive.”

“Accordingly, all officers and soldiers working at the Army Headquarters are being tested and COVID-19 protocols being strictly enforced across all units and formations of the NA. Meanwhile, the entire Army Headquarters complex was thoroughly fumigated on Saturday 12 December 2020.”