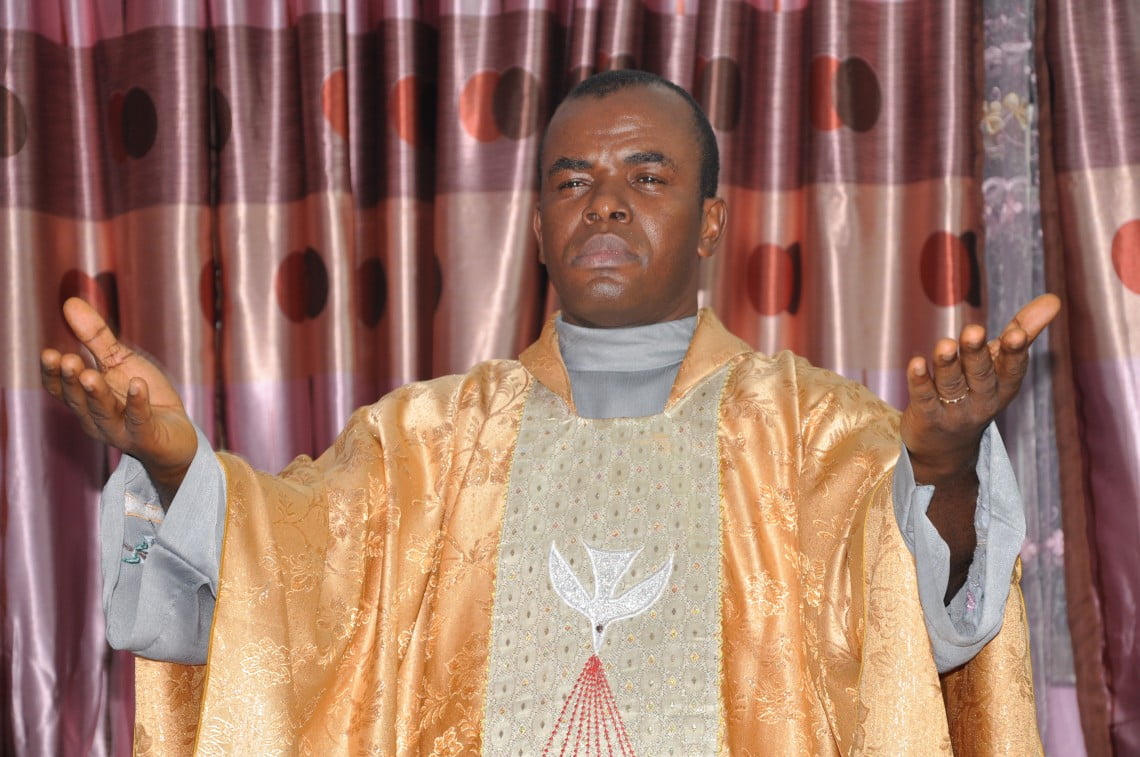 The spiritual director of the Adoration Ministry (AMEN), Rev. Fr Ejike Mbaka, has reacted to the allegation levelled against him by BBC team claiming that they were attacked by the cleric and his members.

The cleric in a statement released through his spokesperson, Maximus Ugwuoke, noted that he and his church members are not aware of the presence of the BBC team on the Adoration ground.

Ugwuoke accused BBC team of badging on Fr Mbaka with a priest from Anambra state and were confronted by the AMEN security operatives.

He added that the reporters were not invited to interview the Adoration spiritual leader.

According to Ugwuoke: “We make haste to state that the report was a carefully crafted mendacious narrative calculated to tarnish the image of Fr Mbaka who in his amiable nature could not have done or directed any of those alleged acts of assault on the BBC team or anyone as alleged against him.”

“An eye witness account of what happened reveals that one Fr Obiekeze (Cajetan) who estranged himself from the ministry and made a viral video with BBC recently abusing Fr Mbaka and his perceived romance with President Muhammadu Buhari, came to join Fr Mbaka at the altar during his last Wednesday’s weekly ministry programme.”

“The said Fr Obiekezie persistently insisted that Fr Mbaka should grant him an interview at his altar. Fr Mbaka in his loving, forgiving and welcoming nature embraced the said priest but however declined the priest’s demand to interview him at the altar wondering when the said priest became a media practitioner and the organization he was working for.”

“Unknown to anyone in the ministry, the said priest came with some persons with an unknown identity who were secretly recording the day’s ministry programme until they were accosted by the ministry security suspecting them to be assassins on a surveillant mission.”

“The said ministry security seized the equipment of the strange fellows and sought to know their identities.”
“Later in the evening after Fr Mbaka was through with the programme and retired to the parish house to continue his consultation with worshippers waiting to see him, altercations between the fellows and the security men at Fr Mbaka’s parish house drew Fr Mbaka’s attention to them and his timely intervention helped to save the situation.”

“Fr Mbaka was surprised when the unknown fellows identified themselves as coming from BBC with Fr Obiekezie. Surprised by such obvious betrayal and a stage-managed visit from a fellow priest, Fr Mbaka directed that every of their seized equipment is returned to them and made sure no one hurt either the priest or the unknown visitors he surreptitiously came with.”

Naija News had earlier reported that Fr. Mbaka and members of his church reportedly assaulted two BBC staff members and their driver on Wednesday evening, in the southeastern state of Enugu.

BBC reports that the journalists, Chioma Obianinwa, Nnamdi Agbanelo and their driver, Ndubuisi Nwafor, were accompanied by a Catholic Priest, Rev Cajethan Obiekezie, who approached them to interview Mbaka.