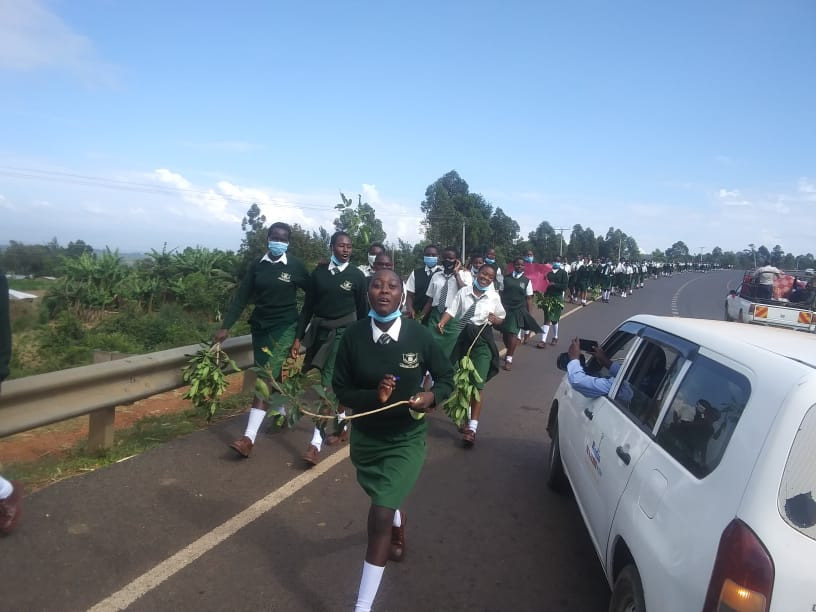 Students of Lugulu Girls High School in Kenya have voiced out and stood their ground after repeated sexual assaults by their teachers.

Naija News understands that the students took to the streets with leaves in their hands to protest against many ‘buried’ cases of rape in the school by the school principal.

The students were spotted in a now-viral video heading to the Webuye police station in the state after their attempt to express their bitter experiences with the ministry of education in Webuye was sabotaged.

According to the young girls, many of them have violated sexually by teachers and residents of the neighbouring communities. The girls disclosed that the most recent incident was witnessed by students but the Principal warned them against informing the parents of the victim or members of the public.

They further alleged that this has been going on for a while and victims always get silenced by the school authorities while the male teacher is sometimes transferred to a different school without being made to face the consequences.

The unhappy students who could no longer keep mute over the repeated assault decided to stage a protest to announce the development to the general public, Naija News reports.

Watch a video from the protest below;

Meanwhile, Nigerian police inspector working for the Agbado Police Station, Lagos State, Adelakun Amubieya, has threatened to kill himself after he was arrested for allegedly raping a university student.