A London woman has taken upon herself to go shirtless and braless in other to raise fund for mental health charity Mind.

Naija News understands that Kerri Barnes rode around the streets of London on her bicycle with just tiny underwear following the death of her cousin who killed herself.

It was said that Barnes was motivated to carry out the fundraising having witnessed the shocking statistics around suicide in the city. According to her while interviewed, the idea of riding naked on the bicycle was from her roommate.

She noted that she had wanted to do something really different in the year to create awareness on suicide and as well raise some money for the mental health charity Mind, but that she ran out of idea until her roomie suggested the bicycle ride.

Naija News understands that Barnes’s target was to raise a least more than £8,000. To achieve this she faced the cold of the day and cycled round on Sunday, Nov 29, wearing nothing but underwear.

“I really wanted to do something this year to shine a light on raising awareness of suicide prevention and to raise some money for Mind – because they’ve just experienced their biggest increase in calls, since the second lockdown began,” Said Kerri while speaking to LADbible.

She added, “Unfortunately, a very close relative made a few attempts on their life in the first lockdown and one of my cousins did kill herself about nine years ago.

“So, I wanted to do something and I thought I’d do something a bit ridiculous – then my housemate suggested the naked bike ride.”

“I think because everybody seems to have suffered in some way with their mental health this year – I think it’s made people very empathetic towards mental health problems.” 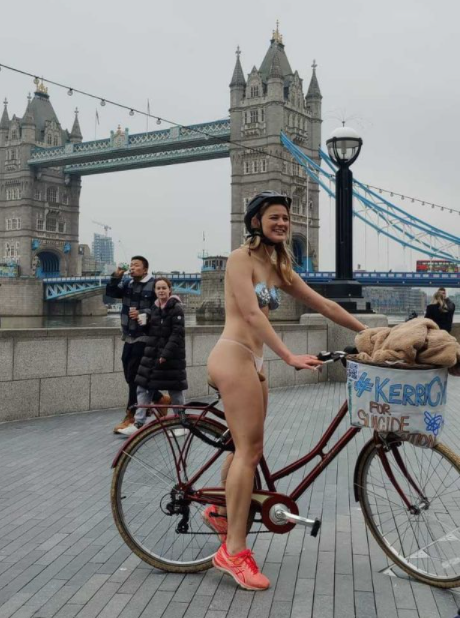 In another news, Naija News reports that a Nigerian activist identified as Ayo has demanded that gay marriage is legalised in Nigeria just the way crossdressing is ‘accepted’ without hatred.