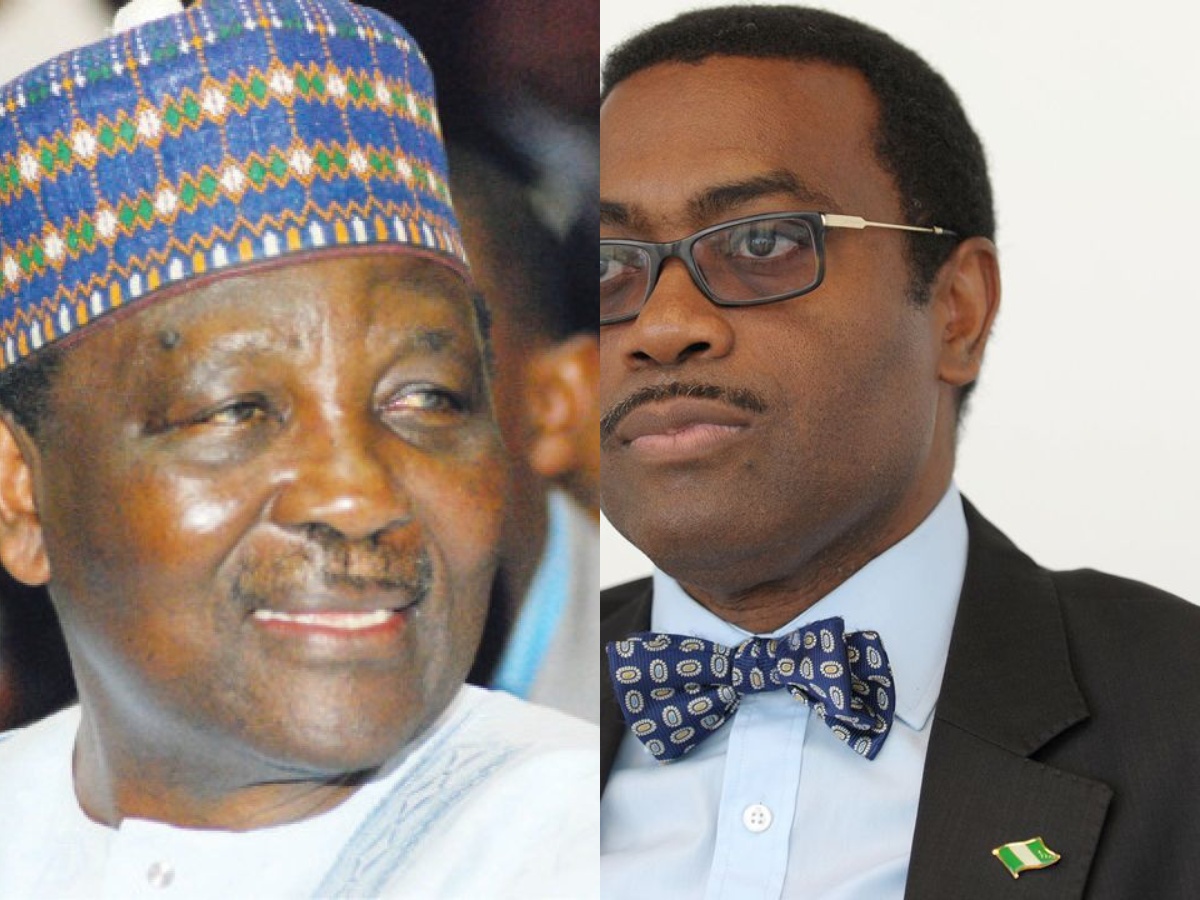 Nigerians have taken to social media to call out AfDB President, Akinwumi Adesina over his statement in defence of former Nigeria Head of State, Yakubu Gowon who was recently accused of looting the Central Bank while in power.

Adesina had waded into the controversy which started when a member of the British Parliament Tom Tugendhat who spoke on Monday, while addressing British lawmakers alleged that Gowon looted half of the Central Bank of Nigeria and escaped with the wealth to the UK.

The allegation has continued to generate mixed reactions even as Gowon himself has come out to deny any such thing was done by him, boasting that he served Nigeria with integrity and commitment.

In his own reaction on Thursday morning, Adesina had tweeted: “Be careful of misinformation! H.E. General Yakubu Gowon, Nigeria’s former Head of State, is a man of great honour, decency, honesty, amazing simplicity, humility and integrity. I know him. A great and admirable elder statesman of Nigeria. His honesty and integrity are impeccable.”

Be careful of misinformation! H.E. General Yakubu Gowon, Nigeria’s former Head of State, is a man of great honour, decency, honesty, amazing simplicity, humility and integrity. I know him. A great and admirable elder statesman of Nigeria. His honesty and integrity are impeccable. pic.twitter.com/YznYN873qH

But after his submission on Twitter, Nigerians have disagreed with his position, arguing that Gowon is far from a decent or honourable man as he presided over the killing of many innocent children during the Biafra civil war in Nigeria between 1967 and 1970 and also allegedly didn’t uphold the Aburi accord, including wasting national resources during the country’s oil boom.

See some of their reactions.

Like the 3 million civilians killed in Biafra war NEVER happened???

Please don’t try to truncate our history with this Okoto meow. Let Gowon sue the UK lawmaker that started the story. Focus on AfDB, you are not his PA! https://t.co/CfLrnFqAsd

There is nothing decent about Yakubu Gowon

Under Gowon’s command, a Red Cross plane carrying powdered milk & dry fish for starving children was shot down in 1969.

He perpetrated a blockade that condemned over a million Igbo children to death by starvation & you put “decency” in the same sentence with him?

Akin Adesina is now Yakubu Gowon’s mouthpiece. These old people will never learn. There is no misinformation here. Gowon is many things but honest. He is the war criminal who renegaded on Aburi Accord, killed 3m Igbos, starved children to death. Gowon & his ilk will burn in HELL. pic.twitter.com/JrH83O5LzN

This is supposed to be a progressive.
There was cricket silence from you when the government was trying to stifle the basic democratic rights of young citizens but the moment they call Gowon a bloody thief (which I do not doubt), you find your voice. Tueh. Shame on you!!! https://t.co/9BLbmoYDRx

You were silent on #LekkiMassacre but you jumped out to defend Gowon. This is disgraceful..Summary..You all are the same irrespective of your Bow Ties https://t.co/OZuxPHRHtB

Gowon violated the Aburi accord, presided over a genocide that killed 3 million people.
Paid lip service to victims with the 3Rs that didn’t see any actual reconciliation, reconstruction or rehabilitation happen.
The abandoned property act, the £20 act & indigenization decree … https://t.co/cgeJFIKN14

Dear flamboyant Akin Adesina, most of the 2-3 million Igbo children who died during that war would have been your age mates today. It is easy for you say this about Gowon today. You lived they did not https://t.co/m2kSOoEqSD

Southerners Predominantly Westerners are just bunch of Adesina’s and Micheal Akanji’s …Covering up the truth for ungodly Reasons…why not let north fight for their Own.. Gowon Will Face it now or Later the aburi Accord he could not Honor. Useless set of Heroes past..Tueh!! https://t.co/G7R93zthzG

Gowon led a civil war that had 3m Igbos killed.
Let’s name some countries with population of 3m;

You think a person who authorized the murders of the equivalent of the population of these countries was a good person? https://t.co/CPicWWhQBW

@akin_adesina them don push you to us abi? Where were you doing the police brutality and by the way let Gowon do the needful. Gowon is still alive, let him say something straight to the UK parliament.

It will be wise if you excuse yourself from this topic. You really do not know a lot about some truly evil people we eulogise today as saints, Gowon being one. Your description of Gen Gowon as those above is very offensive. Show some respect.

The zeal in your defence of Gowon.
He doesn’t even know you exist.
He doesn’t care about you. A military man is always a military. You can insult everybody or even stab yourself. Gowon doesn’t give a shit about you neither does Buhari if you support him.

Mr Akinwumi A. Adesina @akin_adesina I know you trying to be a patriotic citizen and your claims that H.E. Yakubu Gowon is holier than thou might be wrong . I also like that man but who knows he did it🤦🏼‍♂️. Sir, where were you during #ENDSARS crisis ? You NEVER tweeted abt it 😏

Its an absolute disgrace you’re defending a man that couldn’t honor an Agreement that could have galvanized Nigerian development. Better focus on your job and allow Gowon do the needful. https://t.co/sRI4DP1qEG

Let him speak for himself, Southerners are always their mouthpieces