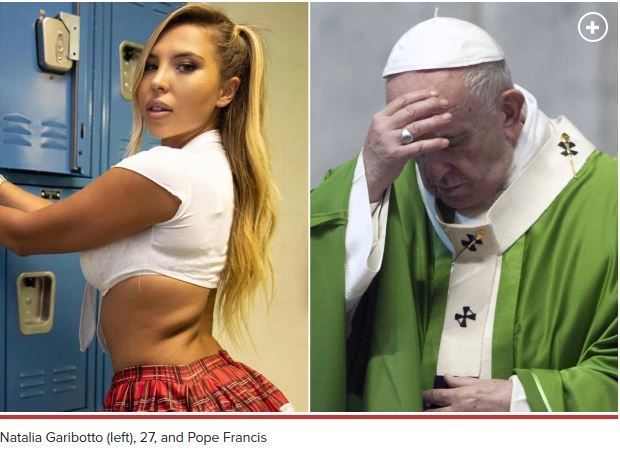 Pope Francis’ Instagram account liked a racy photo of a bikini model dressed in stockings and suspenders, the model has claimed.

Naija News understands that the 27-year-old model identied as Natalia Garibotto, said the Pope Francis’ verified Franciscus account was among the 133,000 that “liked” an image of her standing at a school locker with a white crop-top and a skirt barely reaching her behind.

“My mum may hate my ass pics but the Pope be double-tapping,” the Brazilian bikini model joked with Barstool Sports, which also claimed to have seen the apparent papal seal of approval before it was removed. 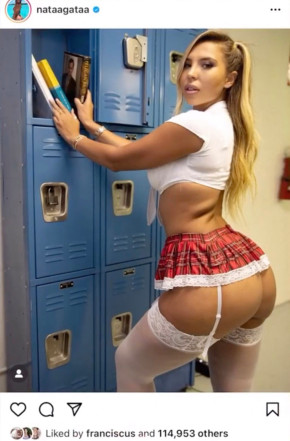 “Brb on my way to the Vatican,” Garibotto joked with her Twitter followers, along with a prayer emoji, adding: “At least I’m going to heaven,” in what appeared to be a joke in reaction to the like on the image in which she teased followers that she would “teach you a thing or two” along with a red devil emoji.

Though the “like” is no longer there, and it is not clear if the Pope controls his own account but news of the apparent scrolling sparked a slew of devilish reactions and jokes.

“God created dat ass. Just appreciating the Lord’s work, as he should,” one of the model’s followers, Eric Graehler, wrote on Twitter, while another, Collin Little, similarly said, “My mans just admiring God’s creation leave him alone.”

“It just means that your ass is divine,” one fan told Garibotto.

The type of photo that the Pope may be admiring from the Vatican was not the only part that caused stir on social media. “I’m still trying to get past the fact that the pope has an IG!!!” one social media commentator noted.