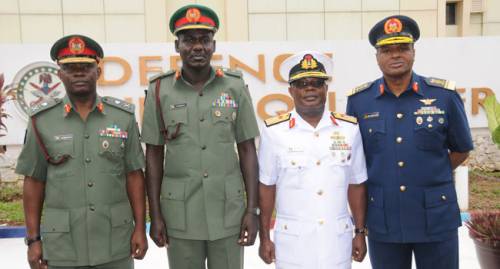 The leadership of the House of Representatives earlier today held a closed-door meeting with all the heads of security agencies in the country behind closed doors.

The meeting, which began at about 2:15pm, is presided over by the Deputy Speaker, Ahmed Wase.

Journalists and others were sent out of the venue as the meeting was about to begin.

The meeting was held some hours after the family of a 13-year-old victim, Ochanya Ogbanje who was raped to death two years ago gave the Inspector General of Police, Mohammed Adamu two weeks to declare her escaped rapist wanted.

The family who accused the IGP of shielding the accused Victor Ogbuja said that two years after her death, the police is yet to declare him wanted or issue a bench warrant for his arrest.

Ochanya’s elder brother Ameh Ejekwonyilo made the statement Monday in Abuja at a press conference organised by the Federal Government Girls College, Gboko old girls association in collaboration with her family.

Ejekwonyilo said that if the ultimatum is not met by the IGP, the family members, FGGC Gboko Old Girls members, the Executive Director Make A Difference Initiative (MAD), Mr. Lemmy Ughegbe, Executive Director, Wanda Adu Foundation, Wanda Ahe and other well-meaning individuals will storm the police headquarters in Abuja to register their displeasure.