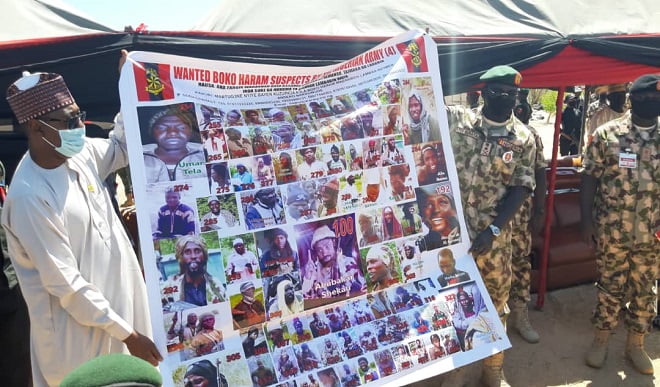 The Nigerian Army on Wednesday declared another batch of Boko Haram terrorists and other insurgents wanted for various crimes relating to insurgency.

This was done at the Chabbal Super Camp in Maiduguri, Borno State at a programme attended by the Chief of Army Staff, Lt. Gen Tukur Buratai, and Governor Babagana Zulum of Borno.

Unveiling the list, Theatre Commander of Operations Lafiya Dole, Maj. Gen Farouk Yahaya noted that it is not the first time the list will be unveiled but it gets reviewed periodically.

Prominent on the list were names of terrorists including Abubakar Shekau and Abu Mus’ab Al- Barnawi.

Governor of Borno State, Zulum in his remarks, called on the terrorists, bandits, kidnappers, and other insurgents to give peace a chance.

He also commended the efforts of the troops in restoring peace and promised the continued support of his administration. Zulum announced a donation of 100 motorcycles to them to make their work easier.

“Today, God in his infinite wisdom has shown us this very important day and therefore, we must commend the efforts of the Nigerian Army, under the leadership of the Chief of Army Staff,” Governor Zulum said.

“The 100 motorcycles will be given to you immediately in order to complement this your gigantic action,” he added.

The banners containing names of the suspects were later handed over by the Chief of Army Staff, Tukur Buratai to Gov. Zulum.

Buratai on his part solicited the corporation of members of the public in exposing the terrorists who may be hiding in their communities.

He reiterated the commitment of the troops to ensure all forms of insurgency is stopped.

He said: “We request your full cooperation. The public as well as the Civilian JTF, you will have a copy each, so you’ll follow up,” Buratai said during the ceremony.

“Some of them may be behind your yard or parading themselves somewhere in the market-place and so on. They must be fished out and those in the forest, if you encounter them, make sure you deal with them decisively if they cannot be arrested or captured.

“It is on this note, we will also like the press to give us their full support to ensure that we have gotten the right solution to ending this menace of the Boko Haram terrorist in our state, in our country, as well as for humanity.”