Six Nigerians including a federal government official have been found guilty by an Abu Dhabi Federal Court of Appeal in the United Arab Emirates (UAE) for allegedly providing money to the Boko Haram terrorist group in Nigeria.

The suspects were accused of facilitating cash transactions to the Boko Haram group to the tune of $782,000 between 2015 and 2016.

According to reports monitored by Naija News correspondent on Daily Trust, two of the convicts, Surajo Abubakar Muhammad and Saleh Yusuf Adamu were sentenced to life imprisonment while the remaining four got ten-year imprisonment each.

The accused were said to have been apprehended between April 16 and 17, 2017, and their homes searched according to the search warrant issued by the National Security Prosecution office dated April 16, 2017.

They were all convicted in 2019 after facing charges of funding terrorists by facilitating the transfer of money from Dubai to Nigeria. 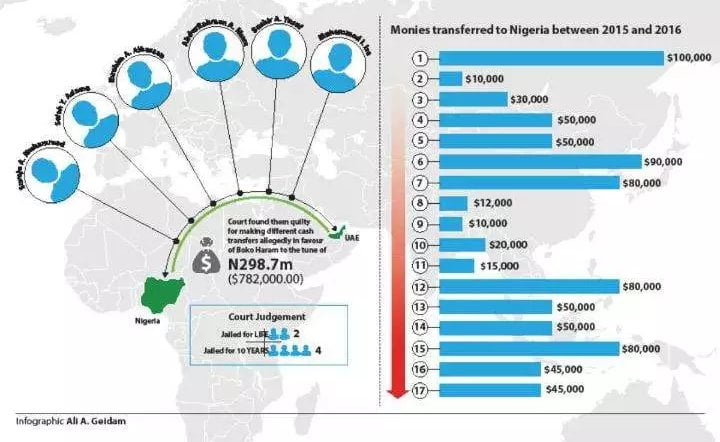 However, when contacted, family members of those convicted maintained the innocence of their relatives, explaining that they were legitimate businessmen who were framed up for illegal activities they knew nothing about.

Court documents on the matter as reported by DailyTrust exposed that the first and second accused were charged for joining the Boko Haram group in Nigeria knowingly, which is a crime punishable under Article 22/2 of the Federal Law No 7 of 2017 with regards to anti-terrorism punishable by death or life imprisonment.

The third, fourth, fifth and sixth accused were charged with assisting the terror group knowingly, which is a crime under Article 31, Clause 1 of the same law, and is punishable by life imprisonment or jail for not less than five years under the UAE law.

They were all discovered to be involved in the funding of Boko Haram terrorist group and their activities based on years of work and investigation by undercover agents.

One of them, Alhaji Sa’idu who is allegedly based in Nigeria, is said to be a senior undercover Boko Haram member responsible for facilitating the group’s access to funds from its sponsors.

Also fingered in some of the transitions is one Alhaji Ashiru, who is said to be “a Nigerian government official” and yet a senior undercover Boko Haram member who facilitated the transfer of misappropriated public funds to the group.

The office of the Attorney-General and Minister of Justice, Abubakar Malami when contacted on the matter, explained that the federal government was already aware of the development and have contacted the UAE government seeking records of proceedings but was yet to get feedback.

“Nigerian government has written firstly for copies of the proceedings, which will give us the opportunity to see whether justice was done or not. And on whether they have committed the crime, we requested to know who and who are involved so that the Nigerian government will know what to do next.

“Nigerian government is working but it doesn’t have the exclusive control, it has to rely on the information provided by UAE. So, it is not in control of the speed of response or action.

“We are working on both the issues that they did not receive a fair hearing and that they were alleged to have supported Boko Haram activities,” information for the AGF’s office explained.

The Nigerian government added that further intelligence has been activated on the matter to discover other people that may be working with the suspected syndicates both within and outside the country in funding the Boko Haram terrorists.

“Since the relationship involves issues of money between Nigeria and UAE, the Nigerian government has equally instructed the existing agencies of government to embark on an investigation on that and we have gone far.

“We await further intelligence from the UAE, which has relevance to the conviction and trial in order to do what we can as a follow-up to take the next line of action,” the report said.

Meanwhile, it will be recalled that earlier in the year, a Nigerian Instagram celebrity, Hushpuppi whose real name is Ramon Olorunwa Abass was arrested in Dubai for stealing over N163 billion naira from various victims through internet scam popularly called 419.