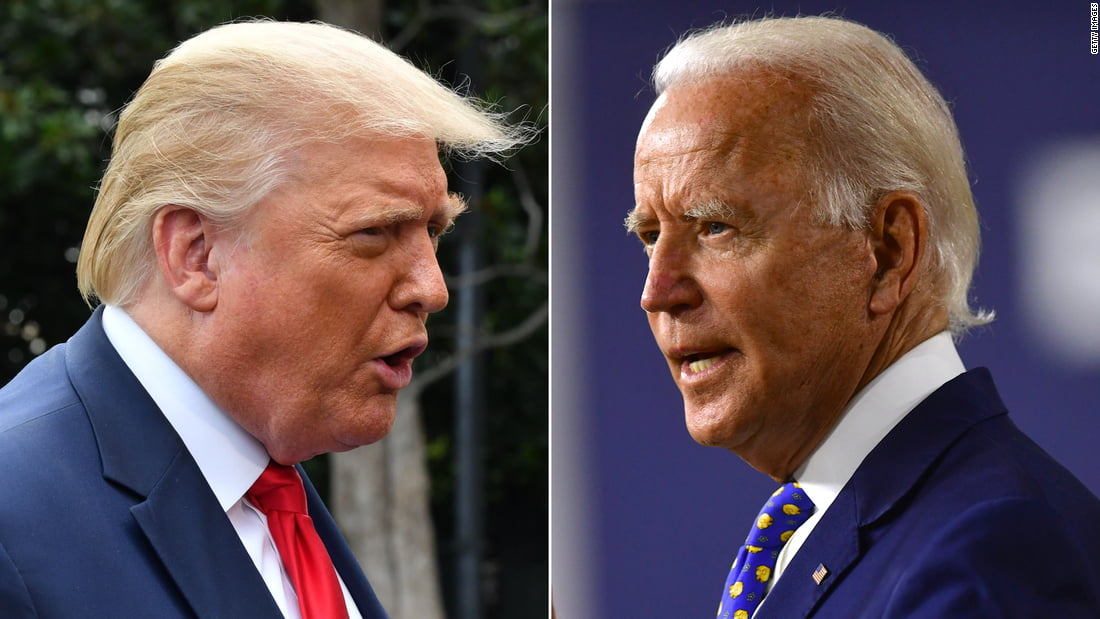 At the end of an election night where a crucial proportion of the votes had not yet been counted, the presidential candidates were tied in the popular vote, but none still had enough votes in the electoral college to be nominated the big winner. While Joe Biden said he remained “optimistic” about the outcome of the count, Donald Trump proclaimed a “great victory” and falsely accused his opponents “of trying to steal the election”.

“Frankly, we won this election,” Donald Trump said at around 2 a.m. He also mentioned an appeal to the Supreme Court, without specifying exactly what it was. He spoke of his fear that his opponents might “find ballots”, implying that they could be ballots that should be rejected.

At his side, Vice President Mike Pence was slightly more cautious. “I believe that we are on the road to victory,” he said during this speech at the White House.

In some states, the counting of votes will resume Wednesday morning after being suspended overnight. President Donald Trump has, in states still awaiting a verdict, an advance that could give him a second term in the White House. But Democratic candidate Joe Biden has strongly warned that the race will not be over until all votes are counted. “We are on the right track,” he told his supporters gathered in Wilmington, Delaware, shortly after midnight.

In the early hours of Wednesday, the fate of the election rested primarily on the choice of voters from three states: Pennsylvania, Michigan and Wisconsin. By early evening, President Trump was ahead of Democratic candidate Joe Biden in all tri-states. In the case of Pennsylvania and Michigan, authorities have already indicated that the count could stretch until the end of the week.

The day after the election, the electoral map is, at this stage of the vote count, exactly the same as in 2016, with one exception: Arizona, the only state so far to be in the process of changing allegiance, in this case in favour of the Democrats.

But this probable Democratic gain – and his 11 votes in the electoral college – is far from being enough to allow Joe Biden’s party to have good hopes of winning at the end of the count. To achieve the 270 votes needed in the electoral college, Democrats must also achieve victory in at least two of the three northeastern states. Nor is it impossible that two votes tied to the proportional distribution of votes in the states of Maine and Nebraska will play a crucial role in determining a winner in the White House election.

The fate of Florida was settled early enough in the evening, announcing at the same time that there would be no Democratic tidal wave. After the first polls in Florida closed at 7 p.m., the results quickly showed the two rivals were tied in that state. In 2016, Donald Trump won the state with 1.2 points ahead of Hillary Clinton.

By giving him a 7-point lead, Miami-Dade County, the most populous in Florida, was notably less enthusiastic for Joe Biden than it had been for Hillary Clinton – in 2016, the candidate there won over 63% of the vote. The losses in Miami-Dade nibbled away gains Democrats may have made in other Florida counties, like the Pinellas.

The hopes of the Democrats in Texas, which the latter hoped to switch to their camp, evaporated over the evening – with 94% of the votes counted, Donald Trump had a 6 point lead over his rival in this state which designates 38 electors.

Addressing his supporters, Joe Biden firmly reiterated his team “will make sure every vote is counted.” In particular, postal ballots mailed before November 3, and whose count, in certain cases, could take a few days and change the final picture.

This is the case, for example, in Michigan, notes political scientist Corwin Smidt. “The first results recorded will be favourable to Trump,” he predicted in an email sent late in the evening. “But with 3 million voters who voted by mail, that means a lot of the votes that will be counted at the end will be in favour of Biden. ”

On Tuesday, President Donald Trump said Americans “have a right to know the winner” on election day. But it was already expected that the increased use of American voters to vote by mail could delay the counting of the ballots.

“Voters will have to be patient while waiting for the election results this year. It is important to recognize that this process may take time.” – Chad Wolf, Secretary of Homeland Security, Tuesday

For their part, Facebook and Twitter had announced a series of measures to limit the dissemination of any announcement of victory before the final results are known. In fact, Donald Trump’s declaration of victory on Twitter was immediately followed by a warning that the assertion could be “misleading.”

As in 2016, the Democrats held, at the end of election night, a small advance of the popular vote in their favour. Joe Biden had been favoured by 49.8% of voters, while 48.6% had chosen Donald Trump.

In 2016, pollsters were surprised by the victory of the Republican candidate. Several hypotheses have been put forward to explain the gap, in particular, because many undecided in key states, who had made up their minds at the very last minute, especially supported Donald Trump. The national polls were right: they predicted Hillary Clinton’s popular vote victory by three points, she won by two points.

Despite fears, and aside from a few isolated incidents, Tuesday’s voting day went well across the country. Attempts at cyberattacks carried out from abroad were observed in the final weeks of the campaign, but authorities believed on Tuesday that the electoral infrastructure “resisted” the attacks. “We have no indication that any foreign actor has succeeded in compromising or affecting the votes in this ballot,” Secretary Chad Wolf said.