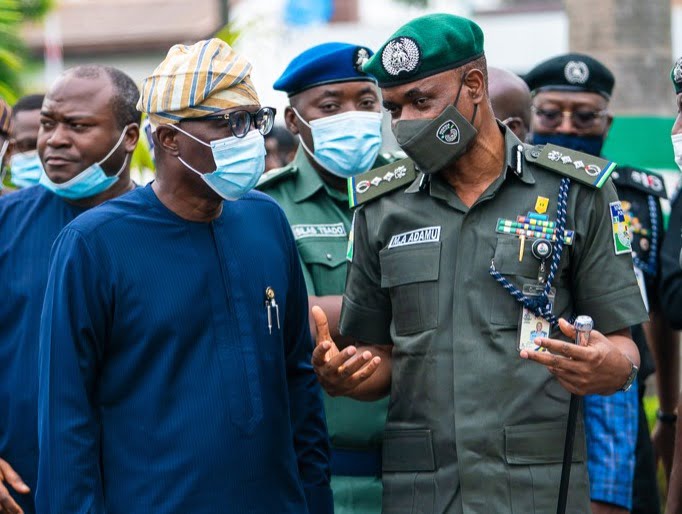 It was the first time the police boss would be visiting Lagos after a nationwide youth demonstration against human rights violations and brutality allegedly committed by the disbanded men of the Special Anti-Robbery Squad (SARS).

Lagos was the epicentre of the “EndSARS Protest”, which later snowballed to coordinated violence that led to a large-scale destruction of assets belonging to the State, Federal Government, police and private individuals.

At 1:45pm, the Governor received Adamu in company of the Deputy Governor, Dr. Obafemi Hamzat, and Chief of Staff, Mr. Tayo Ayinde.

Sanwo-Olu commiserated with the police chief over the mob attacks on police personnel and torching of their stations.

Despite the violence visited on the police formations by hoodlums who hijacked the protest, the Governor commended the officers in the State Police Command for exercising restraint in the face of the attacks.

Sanwo-Olu intimated the IGP on the move by the State Government to rebuild the razed police stations and offer scholarship awards to the children of the officers killed in the violence.

The Governor assured Adamu that all the requests sent to the State Government by the police would be fulfilled, while pledging that the State would be championing a cause to improve citizen-police relationship in order to prevent re-occurrence of the issues that led to the EndSARS protest.

Briefing the State House press on his mission in Lagos, the IGP said he was in the State for an assessment of the police assets vandalised after the protest and to commiserate with residents.

Adamu consoled the Governor and people of Lagos over the coordinated arson, which left strategic assets of the State in ruins. He said the police had widened its intelligence to trace and arrest those that carried out the act.