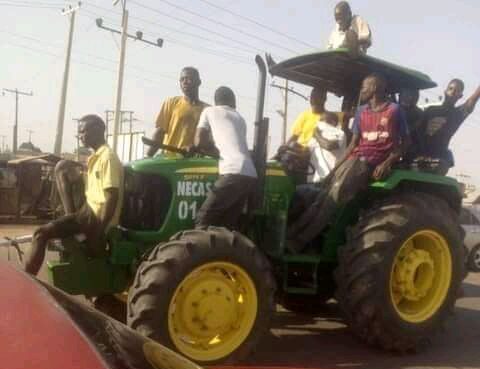 A video has emerged on the internet showing moments Adamawa State youths were driving out farm tractor from a warehouse in the state.

Naija News had reported earlier that hoodlums broke into the NECAS warehouse in Kofare Industrial Area in Yola metropolis and rolled away several brand new tractors.

The hoodlums defied governor Ahmadu Umaru Fintiri’s imposed curfew in the state to carry out the looting. The yet to be captured looters reportedly invaded some private businesses, agricultural storage facilities and government offices in the state also and do away with items of their choice.

This was coming following reports that Irate youths on Sunday, October 25 attacked the state government warehouse and cart away foodstuff and other items.

Watch below moment the youths were rolling out the farm machinery with jubilation.