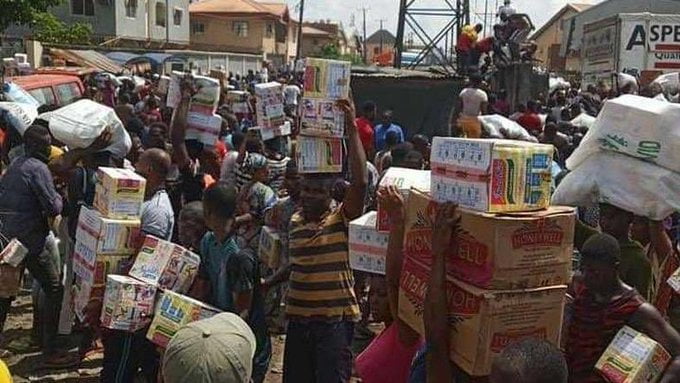 The Nigeria Governors’ Forum has debunked the reports that palliatives uncovered by hoodlums in warehouses across the nation were intentionally hoarded by state governors.

According to the NGF in a statement on Monday, October 26, the reports making rounds in the media about the hoarding of the palliatives were untrue, insisting that the food items were stored purposely for members of the public, most especially the vulnerable.

Naija News understands that hoodlums in Lagos State and some other states in the last week uncovered hoarded palliatives meant for distribution to Nigerians in order to ameliorate their sufferings during the first wave of the COVID-19 pandemic.

However, the governor’s forum following several meetings over the #EndSARS protests faulted the narrative that the food items were kept away from the citizen. The forum said it is making efforts to address concerns of members of the public and that they identified calls for justice and an end to police brutality.

NGF noted that it has in that regard set up judicial panels of inquiry to look into such cases. The forum revealed this in a statement titled, ‘Governors and the CACOVID Palliatives,’ signed by the Head, Media and Public Affairs of the NGF, Abudulrazaque Bello-Barkindo, Naija News reports.

The statement reads; “The NGF regrets the loss of lives and property occasioned by the violent protests that erupted, and calls for calm. The NGF reemphasises and corrects the impression that palliatives found in warehouses that were broken into in Lagos and some other states were kept in storage for members of the society, especially our vulnerable citizens.”

“The erroneous impression in the public domain that these palliatives were hoarded is not just inaccurate, entirely erroneous and untrue but also mischievous, to say the least.”

“For the avoidance of doubt, some of the palliatives had the CACOVID stamp embossed on them, meaning that their source is unambiguous,” Bello-Barkindo noted.

“As we know, CACOVID operations are mainly domiciled in Lagos, being the headquarters of most of the public-spirited organisations, corporate bodies and individuals that came together to form the Coalition Against COVID-19 -CACOVID.

“Until mid-October, when the NGF had its last meeting, up to ten states had not participated in the flag-off ceremonies for the distribution of palliatives in their states. This was because the items meant for distribution in these states had not been completely received from CACOVID.

“Some other states that still had palliatives in their warehouses chose to keep a strategic reserve ahead of a projected second wave of COVID-19. As of a couple of weeks ago, some states were still receiving palliatives from the Federal Government through the Federal Ministry of Humanitarian Affairs, Disaster Management and Social Development.”

The NGF insisted that no state has been involved in or has hoarded any palliatives, assuring all contributors to the palliatives that prior to the looting of these warehouses, states had kept full accounts of all the items received and distributed.

Meanwhile, a woman, living in Akwa-Ibom has narrated how she discovered she has been buying COVID-19 palliatives

The woman claimed to have peeled off the sticker on the carton of noodles she bought and discovered it was supposed to be for the Covid-19 palliatives.