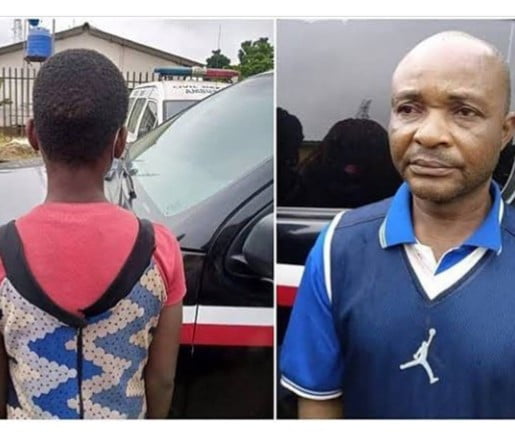 A 13-year-old girl who had suffered sexual assault for years by her uncle who she referred to as daddy, has revealed how the suspect usually had his way with her until his arrest.

According to the young girl while narrating her ordeal on Wednesday, October 14, her aunt’s husband, who she resides at his house, have molested her for years by showing her adult movies popularly known as ‘Blue Film’ before proceeding to forcefully have sex with her.

The girl whose name was not revealed for security reasons alleged that the man had been abusing her sexually in his shop and at their apartment on Surulere Street, Ojo area of Lagos. She claimed that he always threatens to kill her if she opens up to her aunt or tells anyone.

The teenage girl’s confession followed the arrest of one Mr Charles Ekwe, 48 whom the victim refers to as ‘Daddy’. The suspect was arrested by the gender-based unit of the Nigeria Security and Civil Defence Corps, NSCDC, Lagos State Command, Monday, October 12, Naija News understands.

It was reported that the girl has been living with her aunt and her husband since she was nine years old, after the death of her biological father. According to her confession, Mr Ekwe forcefully penetrated her whenever her aunt was out of sight.

“Each time daddy wanted to do it, he would show me a blue film (pornography) on his phone,” she revealed.

“He did it many times. I cannot count the number of times he did it. I was scared to report to my aunty because Daddy threatened to chase me out of the house and kill me if I did,” she added.

Naija News understands that the teenage finally opened up after her aunt, Mrs blessing Ekwe, noticed that all is not well with her and began to ask questions. Upon inquiry, she confessed how she had allegedly been subjected to sexual abuse by her uncle.

To confirm the young girl’s claim, Mrs Eke reported took her to the hospital, where a medical examination conducted on her confirmed her hymen is broken.

Confessing to the crime, the suspect when interrogate by NSCDC officials, said he only fondled the girl’s genitals. He, however, admitted also to subjecting the girl to watching pornography videos on his phone.

On his part, while addressing newsmen on the development, the NSCDC Lagos State Commandant, Mr. Ayeni Paul, said: “The sexual abuse suspect will face the full wrath of the law and will be handed over to the appropriate agency for further investigation and prosecution.

“This is a heinous crime and all perpetrators of such, when caught, will be made to pay dearly. The gender-based unit of the Corps saddled with the responsibility of handling rape, domestic violence, sexual assault and defilement, as well as child abuse cases, has well-trained officers to handle such cases,” Mr Paul noted.

He, therefore, enjoined members of the public to report such cases to the command, for prosecution.