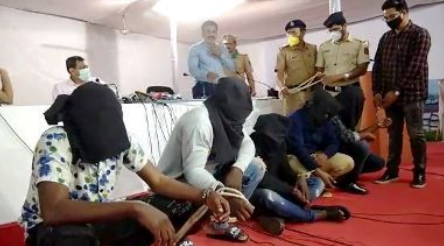 Indian Cyber Police has arrested five persons for allegedly defrauding a woman to the tune of $56,793 under the guise of friendship on social media.

The five suspects, four Nigerians and an Indian accomplice reportedly connived to defraud one Reena Samsher Singh, a 56-year-old ex-military nurse, using social media relationship as their basic tool to win her trust.

Naija News learnt that one of them had befriended Singh on Facebook using fake details on his profile.

However, accused persons where tracked down on Tuesday, October 13 by the Nagpur Cyber Police with the help of CCTV footage of bank branches where the victim had deposited the money.

The Police disclosed that one of the accused persons had claimed to be from the United States and convinced Singh that he would send her gifts and gold jewellery. The accused asked her to deposit money in various bank accounts for `releasing’ the goods from the customs.

After depositing the money, the fraudsters reportedly started sending WhatsApp messages to Singh threatening to implicate her in a money laundering case if she failed to pay the money in.

Singh, however, fell into their trap by depositing $56,793 in accounts in Vijaya Bank, Canara Bank, UCO Bank and HDFC Bank. Convinced that she was being defrauded by cybercriminals, Singh reported the incident to the police.

Naija News learnt that the said amount were diverted into eight different accounts most of which were traced to Delhi resident, Sujit Tiwari, who was the first one to be picked up by the city police team.

While still making efforts to trace the passport and visas of the Nigerian nationals, Cyber cops, under city police chief, Amitesh Kumar, and additional CP Sunil Phulari, had frozen the eight bank accounts with a balance of around Rs18 lakhs, seized 13 mobile phones and 18 different credit cards from the gang.

Meanwhile, Russia police have arrested a mother and her daughter for conniving together to kill her (the daughter’s) husband and fed his remain to rats.