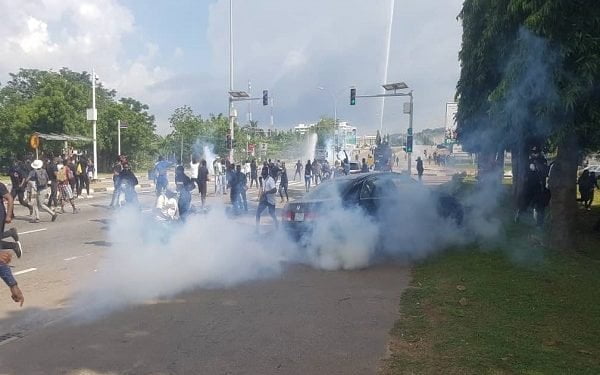 The identity of the man behind the attack on #ENDSARS protesters in Abuja on Wednesday, October 14 has been revealed.

Naija News had reported earlier that some thugs armed with cutlasses invaded the protest venue at Berger junction on Wednesday after the #EndSARS protesters had convened.

The hoodlums vandalized cars, properties and as well injured some protesters gathered under the Berger bridge in Abuja, Naija News reports.

Exposing the sponsor of the attack on the protesters, one Anasu Umar who spoke with SaharaReporters’ correspondents, revealed that it was Jabi Motor Park Chairman, Nasiru Bude who contracted his brothers and convened them to the venue of the protest to disrupt the process.

According to Umar, the awful incident claimed the life of one of his brothers. He alleged that Bude asked the hoodlums to invade the protest ground with cutlasses, carved woods and other deadly weapons to disrupt the exercise.

He said, “My name is Anasu Umar, what happened today is that there was a protest for #EndSARS
Like usual, they cordoned off the road then they called my brothers to come and disrupt the protest.”

“They said we should hold knives and take over the streets and when we went, the protesters were able to repel them and four people died in the process.”

Umar disclosed the name of those who died in the incident as Mohammed, Sani, Sadiq, adding that one other Ali Sidi is currently hospitalized.

Speaking about his brother who died in the chaos, Umar said, “Sadiq my brother died in the incident. He died in Berger close to the bridge. As they were advancing to attack the protesters, tear gas was fired on them and a car in the midst of the chaos ran over my brother.”

Watch the full video below as made available by SaharaReporters;

Meanwhile, activist and publisher of Sahara Reporters, Omoyele Sowore, has alleged that officials/operatives under the President Muhammadu Buhari-led administration instigated thugs against the #ENDSARS protesters, in a bid to silence them.