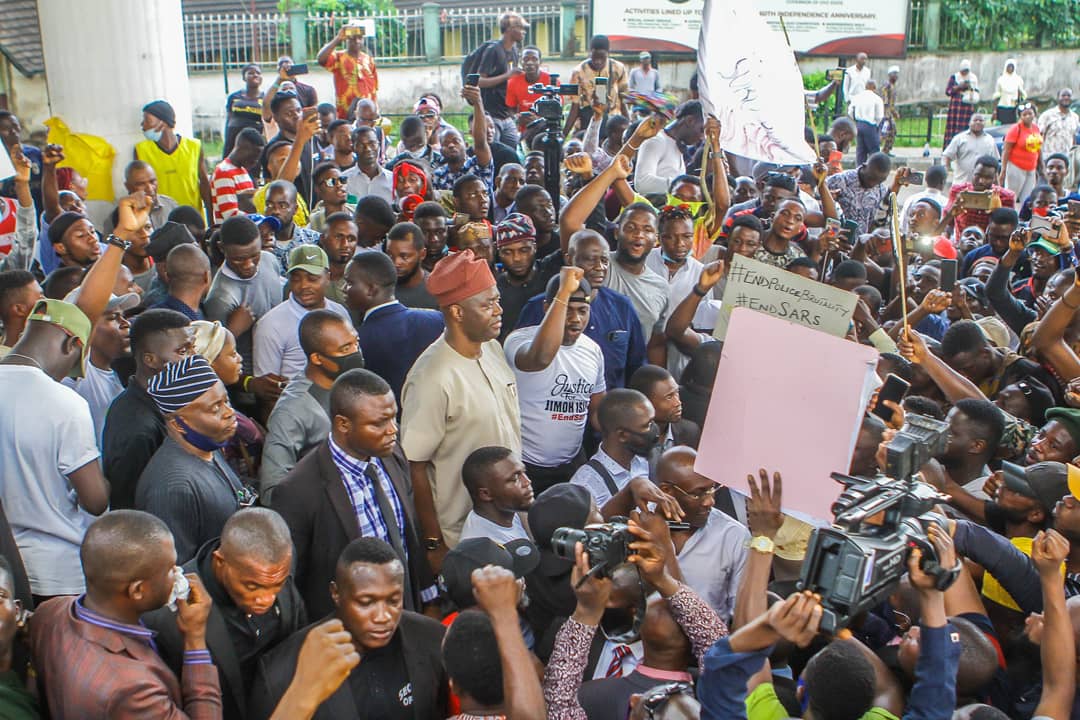 Oyo Governor Seyi Makinde has assured #ENDSARS protesters he is fully in support of their agitations.

He spoke while addressing thousands of protesters who waited for him for hours to address them.

The protesters had refused to disperse from the Oyo State Government Secretariat, Agodi, Ibadan where they converge until the Governor showed up hours later.  They rebuffed attempts by Deputy Governor Rauf Olaniyan to address them on behalf of Makinde.

The Governor, who went on a condolence visit to Ogbomoso over the killing of #ENDSARS protesters, arrived around 5 pm.

He commended the youths for staging the protest, saying it was an attestation to the fact that they were not lazy.

According to him: “First, I would have been with you earlier, I had to go to Ogbomosho, I went out there to see things for myself and also to visit the Kabiyesi, the Soun of Ogbomosho and to also meet the families of those who lost their loved ones.

“So, what I am saying is that I am with you 101 percent. I want to thank you because you are Nigerian youths. You are not lazy, you are not hoodlums, you did not vandalise anything.

“What you have done is to show peacefully that certain policies of the government and the brutalization coming from the Nigerian Police Force must stop.

“I can tell you that we as leaders, we have to do more. We have to provide more. All of these protests are not just about SARS. There is a need for employment for the youths.

“There is anger in the land because opportunities are few and far in-between. So, as leaders, we have to do more, our youths have to be productive. We have to create opportunities for you.

“Peaceful protest is guaranteed under our Constitution. But I want to beg you, all the things been requested in here, all of the protesters that are being detained will be released.

“I have spoken to the Attorney General of the State and Commissioner of police and I agree that they need to be compensated.

…says 'I'm with you on call for end to police brutality'

…promises to engage with youths, address unemployment#Oyostate Governor, Engineer Seyi Makinde, has declared his full support for those calling for an end to police pic.twitter.com/YaahXfneAI

INEC Commissioner: Reasons Why Onochie Is Not Fit – Falana