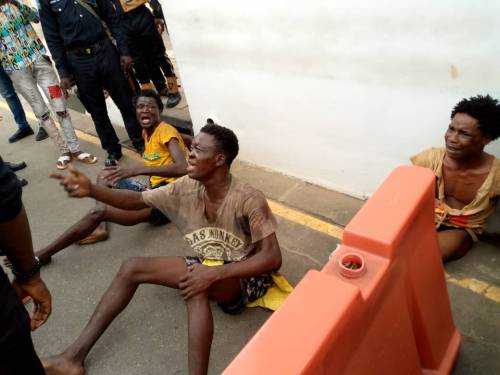 Armed thugs have attacked youths protesting under the #EndSARS movement  against police brutality in Lagos.

The thugs stormed attacked the protesters with machete, charms, and sticks at the Lagos-Abeokuta Expressway.

The thugs were however repelled by protesters who overpowered them.

Three of the thugs were caught and handed over to security personnel.

They harassed the protesters, including passers-by, destroying vehicles parked in the area.

But the protesters were able to regroup and mount a counter attack, chasing away the thugs.

Recall that Nigerian youths have taken to the streets for the past one week to protest extrajudicial killings and brutality by the now-disbanded Special Anti-Robbery Squad (SARS).

Unsatisfied with the IGP’s actions so far Nigerian youths vowed to continue with protests in Lagos and Abuja.