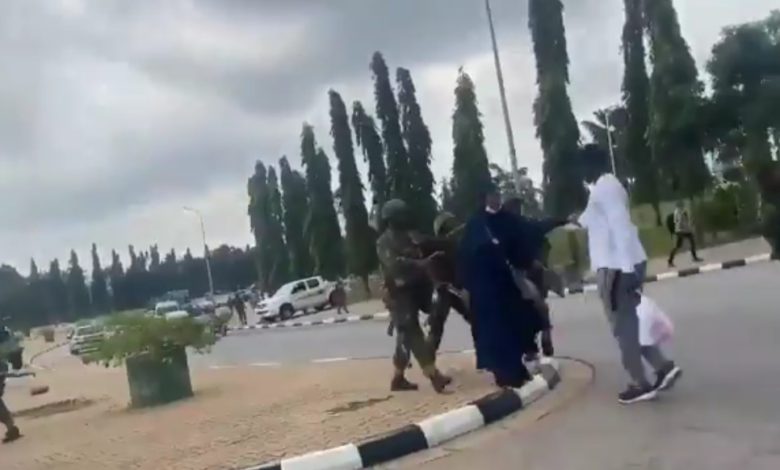 Men of the Nigeria Army on Tuesday attacked #EndSARS protesters calling for the scrapping of the Special Anti-Robbery Squad (SARS) at the National Assembly.

The protesters, who include sociopolitical activist, Aisha Yesufu, were demanding an end to police brutality and extra-judicial killings.

The soldiers also seized a camera and microphones belonging to ARISE TV at the scene..

The youths, who had stormed the Assembly bearing placards and chanting solidarity songs, besieged the gates of the National Assembly, around noon, a situation that led to the shutting of the main gate by security agents.

The presence of the protesters at the gate caused traffic gridlock in and around the main gate of the National Assembly.

Recall that Nigerians have for the past seven days taken to the streets to call for the scrapping of the notorious SARS a unit of the police.

Following days of protest the Inspector General of Police (IGP), Mohammed Adamu, announced the scrapping of the unit.

President Muhammadu Buhari in a video on social media on Monday also confirmed the disbandment of SARS.

However, Nigerians remain on the streets calling for an end to police brutality and police reforms.

This led to a clampdown on protesters in Ogbomoso, Oyo State and Ogun and some parts of Lagos State.

Amnesty International has accused the Nigeria Police of killing over 10 protesters since demonstration began.