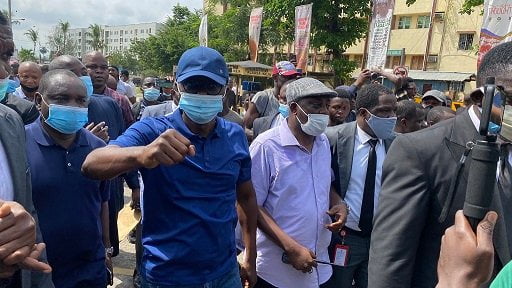 There was a mild drama on Tuesday at the venue of the #EndSARS protest in Lagos State while Governor Babajide Sanwo-Olu was addressing the crowd of protesters.

The Governor who briefly joined the protesters to demand a total end to all forms of police brutality and the Special Anti-Robbery Squad attempted to address the protesters.

While the Governor was still speaking, the DJ played the popular song by Davido – ‘fem’ and the crowd joined in as they demanded Sanwo-Olu stop speaking and make the government take action.

This DJ at the #SarsMustGoNow protest in Lagos is a savage, he played FEM while Sanwo-Olu is addressing the public ? pic.twitter.com/21eqtLlMZQ

Meanwhile, Governor Sanwo-Olu who appealed for calm from the protesters, has left for Abuja, the nation’s capital where he is expected to meet with President Muhammadu Buhari and present the demands of the protesters on police reforms in the country.