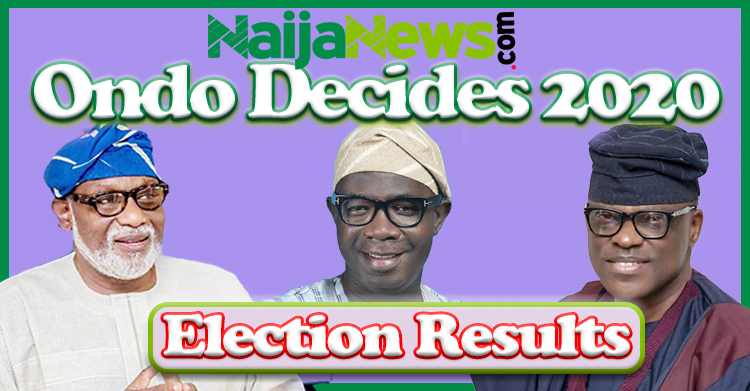 The first result of the ongoing Ondo governorship election in Ondo State, southwest Nigeria, has emerged.

The election is taking place in eighteen (18) Local Government Areas (LGAs) and two hundred and three (203) wards and  three thousand and nine (3,009) polling units in the states.

No fewer than 17 candidates are eying the Alagbaka Government House in Akure but of the 17, only three have been identified by political analysts as the top contenders for the Ondo governorship election.

The candidates seen as the main contenders for the number one political position in Ondo state are: the incumbent Governor Rotimi Akeredolu (SAN) of the ruling All Progressives Congress (APC), who is seeking re-election, Eyitayo Jegede(Peoples Democratic Party(PDP) and Deputy Governor Agboola Ajayi(Zenith Labour Party) who is trying to proof a point since he dumped his principal (Akeredolu) for the top job few months to the election.

According to INEC, the analysis of Permanent Voter Cards (PVC) collection across the councils shows voters’ enthusiasm with 1,478, 460 cards collected represent 81 per cent of the 1,822, 346 total voter population.

Meanwhile, Akure South, which comprise of Akure city, has the highest number of PVC collection put at 207, 238. The lowest is Akoko Southeast, which has 32, 763. On the other hand, there are 343, 886 uncollected PVCs, representing 19.9 per cent of the total registered voters for rhe Ondo election.

Below is the First Ondo Election Result…

Please note that these results are yet to be confirmed by the Independent National Electoral Commission, INEC, the only body recognised by law to declare election result.