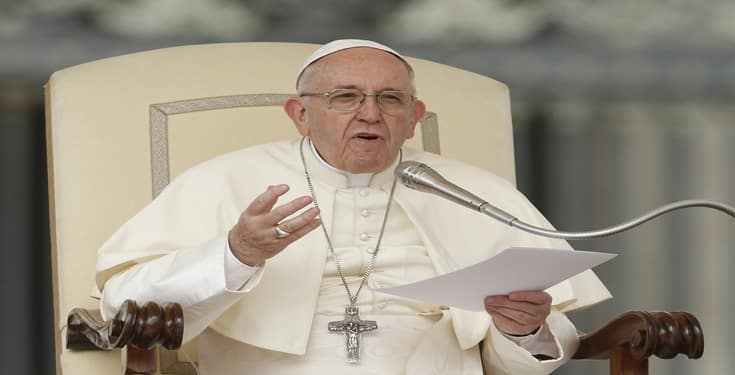 Pope Francis has slammed the United States President, Donald Trump,  over his plans to build walls at the US-Mexico border.

He stated this when newsmen asked him [Pope] about Trump on the papal airliner as he returned to Rome, Italy, after his six-day visit to Mexico.

The pontiff stated this barely three hours after he had concluded his Mexico trip by presiding over a huge Mass in the border city of Ciudad Juárez.

The leader of Catholics around the world stated that Donald Trump “is not Christian.”

He said: “A person who thinks only about building walls, wherever they may be, and not building bridges, is not Christian.”

On if he was planning on influencing Catholics in how they vote in the US presidential election, Pope Francis said he “was not going to get involved in that“.

“I say only that this man is not Christian if he has said things like that,” Francis maintained.

“We must see if he said things in that way and in this I give the benefit of the doubt.”

Men With Deeper Voice Less Likely To Be Faithful – Researches

HIV Positive Woman Celebrates 22-Years Of Living With It