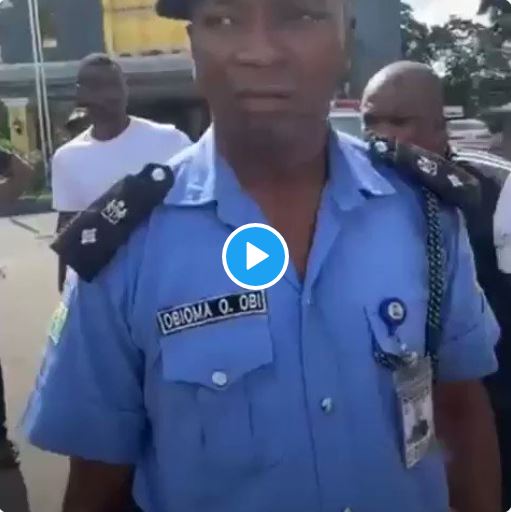 Obioma O. Obi, an officer of the Nigeria Police Force (NPF) has been caught on camera assaulting unarmed #EndSARS protesters.

Naija News had reported earlier that Nigerians trooped out en-mass to protest against police brutality in the country which has led to the deaths of young Nigerians in recent times.

Nigerians demanded among others, the proscription of the Federal Special Anti-Robbery Squad (FSARS), a unit of the Nigerian Police Force (NPF) during the protest today. In the Lagos, Nigerian musicians, Falz and Runtown led the protest which could be described as peaceful.

However, the reverse was the case in Imo State, Owerri to be precise as a police officer, Obioma O. Obi, who has been identified as the DPO of Orji Police Station was caught on camera assaulting protesters.

It was learned that the chaos occurred when #EndSARS protesters stormed Orji Police Station in Owerri in a bid to send the #EndSARS message but the protest was intercepted by the police.

While at the police station, it was gathered, that the DPO of Orji Police Station, Obioma O. Obi, came out to address the protesters and during his address, the police officer reportedly told the protesters to go back home adding that the government will see to their plight, but the protesters refused to acknowledge his call.

Naija News learned that the #EndSARS protest became violent when the protesters used unpleasant words on the DPO and in turn, the police officer who was apparently displeased with the utterances, punched a protester and furiously brought out his service pistol and threatened to shoot all the protesters if they do not leave the station.

Watch the video of the incidence below…

Let it be put under record that officer Obioma O. Obi of the NPF @PoliceNG assaulted and pulled a loaded weapon on peaceful protesters, Let the reform start from this video #EndSars #EndSARSBrutality #EndSarsProtests pic.twitter.com/kws9pEHCT2