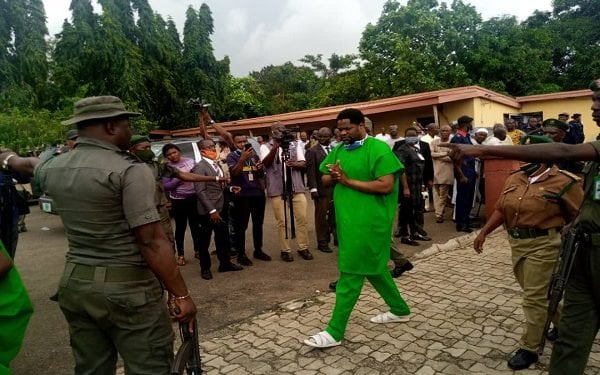 A high court sitting in Akure, the Ondo State capital on Tuesday, 6th October 2020, sentenced Prophet Babatunde Alfa (Sotitobire), founder of Sotitobire Praising Chapel to life imprisonment in the case of a child that went missing in his church last year.

The prophet was found guilty alongside five others on two- count charges bordering on kidnapping, aiding and abetting to kidnap preferred against them.

Justice Olusegun Odusola who presided over the case of a one-year-old child, Gold Kolawole who went missing from the prophet’s church in 2019, found the accused guilty of charges preferred against them.

The missing child has not been found since he went missing from the church, the parents accused the prophet of complexity in the matter and dragged him before a court of law.

Gold went missing on November 10 2019 during the Sunday service in the church after his mother, Mrs Modupe Kolawole dropped him at the children’s department of the church which is located at the Oshinle Quarters area of Akure, the Ondo State capital.

The mother alleged that Prophet Alfa is behind the disappearance of her son and that he is using his contacts to harass them from getting justice.

After the child went missing, the parents of the boy, who was one year old when the incident happened, petitioned the Department of State Services over their missing child.

However, the police later disclosed that the child’s body was not exhumed from the church premises.

In December 2019, Prophet Alfa Babatunde of the Sotitobire Miracle Center, Akure, Ondo State, was arraigned before the Magistrates Court sitting in Oke-Eda, for felony and kidnap.

The pastor and six others were arraigned by the officials of the Department of State Service on two counts.

The founder of Sotitobire Center was arraigned alongside six other members of the church.

Almost one year after the incident, on 6th October 2020, the accused have been sentenced to life imprisonment by Justice Olusegun Odusola.