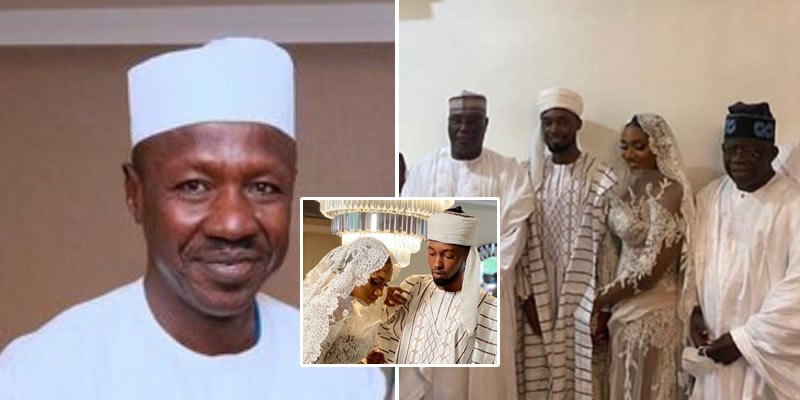 Naija News reports that the claim that the suspended EFCC Chairman was reportedly shoved aside twice at Atiku and Ribadu’s children wedding was made by a popular Nigerian journalist, Jaafar Jaafar.

The claim by Jaafar is coming months after Magu was arrested amid allegations of corruption on July 6, 2020, and brought before the Justice Ayo Salami-led Presidential panel for interogation.

The suspended EFCC Chairman was accused of being unable to account for the interest accrued to recovered funds of about N550bn by the EFCC, though he has on several occassions pleaded not guilty.

Giving an update on what happened at the wedding ceremony in a series of tweets, Jaafar wrote: “Appearing without escort, his face masked, very few people recognised d suspended chairman of EFCC Ibrahim Magu today at d Ribadu/Atiku kids’ wedding. He was shoved aside twice at d gate until I rushed to tell d policemen that it was CP Magu they pushed aside. Life!”

“I stand by my earlier tweet that Magu was actually pushed aside twice at the gate of Nuhu Ribadu’s house today. I have nobody to impress by concocting stories. By my training as a journalist, I know the perils of peddling falsehood.” 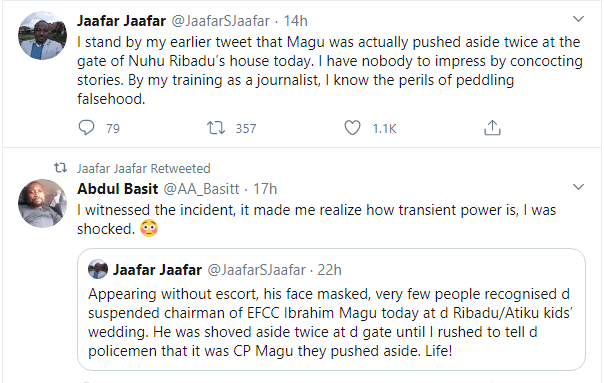