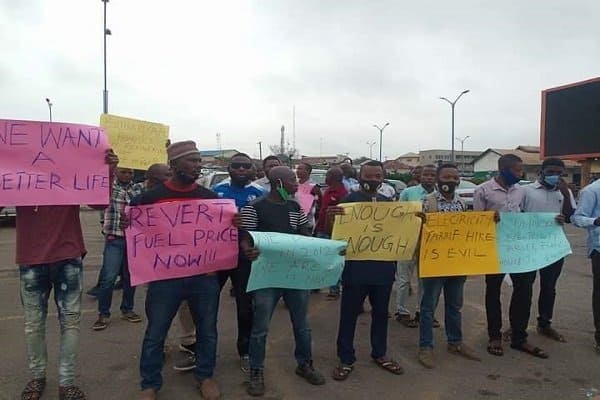 Nigerian youths have begged the National Assembly to be fair enough by striking out the lingering proposed social media bill.

The call was made in a statement on Friday, October 2 by the Centre for Advancement of Civil Liberties and Development, popularly recognized as Centre for Liberty.

Naija News understands that the youths in a statement jointly signed by Adebayo Raphael, Ariyo-Dare Atoye, and Deji Adeyanju, who are the co-conveners of the group expressed their displeasure against the increase in electricity tariff hike and Companies and Allied Matters Act 2020 in Nigeria.

The group during its protests tagged ‘#NotYetIndependent’ held in Lagos, Abuja, Yola, Benue, Bauchi, Benin, Auchi, and Iseyin respectively noted that the exercise was organised against impunity, injustice, bad policies, and bad leadership in Nigeria.

The youths urged Nigerian lawmakers to kill the social media bill, describing the bill and the fuel price hike as unpleasant developments in the country. According to them, the lingering legislative consideration of the Social Media Bill and Hate Speech Bill seeking to criminalize freedom of expression and punish citizens for freely expressing themselves.

A part of the statement reads: “We recall that between March 19, 2020 and now, the price of petrol being sold to ordinary Nigerians has gone from N121.50 to N162 or more in some places. In the same vein, the tariff for electricity was increased by 100 per cent, taking effect from September 1, 2020, and adding salt to the injury of economic hardship of Nigerians.

“And as if those weren’t enough, the government hurriedly passed a bill that will ensure the disappearance of the third sector in Nigeria into law; the Companies and Allied Matters Act 2020, was passed by the National Assembly and became law upon President Muhammadu Buhari’s assent on August 7, 2020.

“These unpleasant developments followed the lingering legislative consideration of the Social Media Bill and Hate Speech Bill seeking to criminalize freedom of expression and punish citizens for freely expressing themselves.

“The obnoxious provisions in the CAMA Act that undermines nongovernmental organizations, and also the entire provisions of the social media bill and hate speech bill, are legislations worse than colonial edicts and laws, and they seek to subjugate rightsholders and put them at mercies of the ruling elites.”

Meanwhile, Lagos State Commissioner of Police, Hakeem Odumosu, has ordered for immediate detention and orderly room trial for an inspector who brutalized a PUNCH journalist.