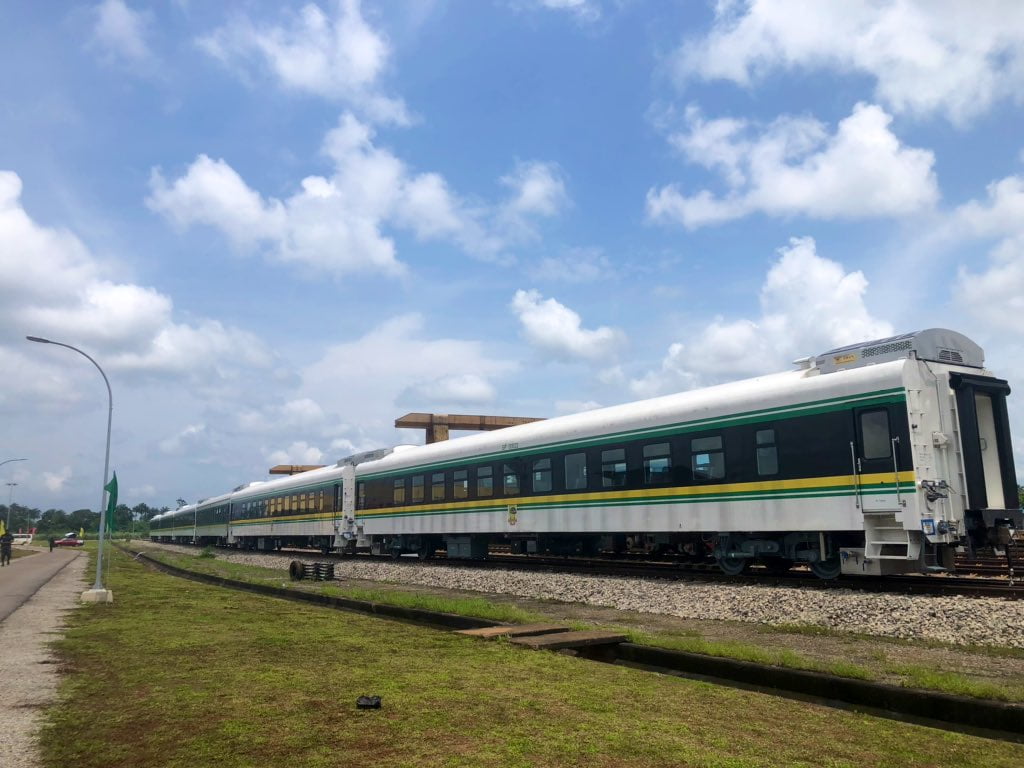 Have you heard the news? I’m sure you have. But just in case you haven’t, here’s the news on the hour: After 33 years, the 326 Km Itakpe-Ajaokuta-Warri Rail Line and Ancillary Facility Yard has been commissioned for commercial operation.

The event came up Tuesday September 29 with President Muhammadu Buhari flagging off the project in a virtual ceremony.

Minister of Transportation, Chibuike Rotimi Amaechi, announced that the rail project was conceived in 1987 under the Ibrahim Badamasi Babangida military regime, but “underwent protracted hiccups and prolonged abandonment,” suffered massive vandalization, till it was resuscitated by the Buhari administration, completed, and now commissioned.

Minister Amaechi added that the single track standard gauge railway line was built strictly from annual budget provisions. No loan. It would be linked to the Warri port, and northward to Abuja.

Coming in the week that Nigeria turned 60, it was a worthy Diamond Jubilee gift to the country. A project conceived 33 years ago has been completed, and put to use by Muhammadu Buhari. No wonder my heart is ‘beating duduke duduke.’

Rail revolution. That is what President Buhari has precipitated in Nigeria. He inherited the Abuja-Kaduna project, completed it, and it has been up and running for a couple of years. He started the Lagos-Ibadan project, and it would be commissioned anytime soon. Ibadan to Kano has been awarded, while Lagos-Calabar is on the cards, among others. Itakpe-Ajaokuta-Warri is commissioned . Buhari has gone rail-wire, ‘and that is why my heart dey beat like duduke duduke.’

The President himself described the Tuesday event as “milestone occasion.” Yes, it is. A 33-year old project has been completed. Under no one else but Muhammadu Buhari, the good Fulani man from Daura, in Katsina State. Didn’t some people say all Fulani people were bad?

The President said railway was vital backbone to support industrialization and economic development. He added that new rail lines have been approved in the country, as well as the reconstruction and rehabilitation of some others.

Still kindling the joy kiln in our hearts, President Buhari said he had directed the Ministry of Transportation to link all rail projects in the country to ports of origin and destination at places like Apapa, Tin Can, Warri, Onne, and Calabar. Yet, some naysayers want us to believe that Nigeria is collapsing. And I say yes. Nigeria is collapsing forward.

Railways will boost trade, generate wealth, and create employment. Both the local and national economies will be boosted and invigorated. Criminality will reduce, and the various parts of the country will be opened up and linked with one another. Is that symptomatic of a collapsing country? Yes, collapsing forward.

There are many lessons to learn from the completion of the Itakpe-Ajaokuta-Warri rail project, after 33 years. One is that government is a continuum, and should always be seen so.

Between 2015 and now, the Buhari administration has completed many projects it inherited. Roads, rail, bridges, airports, water projects, and many others. It is not about pride, not ego, not competition. My Mercedes is bigger than yours? Not at all. It is about serving the country, and giving her the best.

Sadly, in this same country, you hear some people shout, Buhari is only completing the projects we started. And I say; so what? Are they personal projects? Are they not national projects, for the good of the people? Should he rather abandon the projects, after hundreds of millions have been sunk into them? And has Buhari not started new projects, which have been completed? Think, brothers, think. Think, sisters, think. It’s all about our country, and not personal aggrandizement.

Another lesson. Focus will take you there. It is said that when you go to the market, you should concentrate on who you are transacting business with, and forget the noise of the market. If you dwell on the noise, you’ll go back home empty handed.

And yet another lesson. No matter how long it delays, stay the course. The vision is for an appointed time, and it will not delay. If it tarries, wait for it, for it shall surely come. After 33 years, the Itakpe-Ajaokuta-Warri rail project was completed. Are there people poking their tongues at you, sniggering, and saying you are an abandoned project? Stay the course. You will yet become a praise in the land. And they will glorify God in you.

Have you heard the news? The rail project was commissioned after 33 years. Monuments to rot and decay may eventually become legacies. And Buhari will have countless numbers of such by the time he exits office. 2nd Niger Bridge. Legacy. Enugu-Port Harcourt Expressway. Enugu to Onitsha. East-West road. Lagos to Ibadan Expressway. Bridges. Airports. Rail. All abiding legacies. Buhari will leave plenty of them.

I did a tweet on Monday afternoon, announcing the commissioning of the rail project next day. Later, I went to read the comments. Some people rejoiced, and had kind words for the Buhari administration. But some others were spitting like snakes, wailing like wailers, and using foul language from the very pit of hell. The lesson? Even if you feed an entire town daily with pounded yam, egusi soup, cow leg, snail and orishirishi (yummy yummy), you will still have enemies. Just remain resolute, and you will get to where you are headed.

In the broadcast to mark National Day on October 1, the President had admonished: “Together we can change our condition for the better and more importantly, together we can do much more for ourselves, and for our country.” True. Resolve to be a centripetal rather than centrifugal force, and we will have a much better country.

Whether Bitter-Enders who have resolved to see nothing good in his administration change their minds or not, President Buhari is succeeding, and would succeed even more. It is for the good of our country, and for the greater majority. “And that is why my heart dey beat like duduke duduke.”

*Adesina is Special Adviser to President Buhari on Media and Publicity