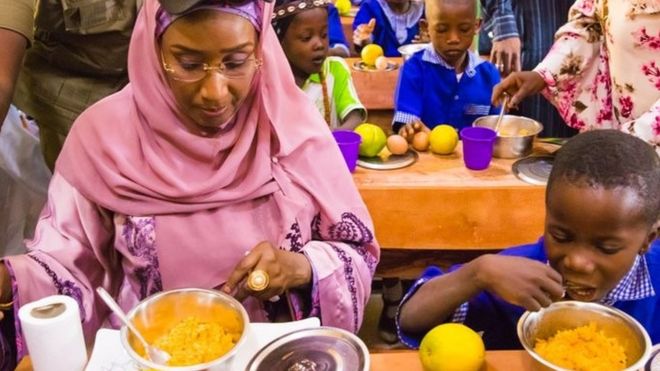 There was a lot of talk on Tuesday on the social media platform, Twitter in Nigeria over allegations by the Independent Corrupt Practices Commission (ICPC), that N2.67 billion earmarked for school feeding in Nigeria has been misappropriated

The chairman of the ICPC, Prof. Bolaji Owasanoye, on Monday said at a meeting on corruption at the Presidency in Abuja that large sums of money had been diverted and found in the bank accounts of some government employees.

Professor Bolaji said it was understood that the  Treasury Single Account (TSA), general fund system was being set up to monitor and disburse funds.

Yet a portion of that money was diverted, so they were investigating the matter.

However, the news was recently circulated in Nigerian newspapers accusing the Ministry of Humanitarian Affairs and Minister Sadiya Farouq of overseeing the relief efforts during the closure and distribution of relief items to her family. , schools in the states and the Federal Capital Territory of Abuja.

Hours after the news broke, the Ministry of Humanitarian Affairs responded with a statement denying any involvement of Minister Sadiya or her staff.

What is the ministry saying?

In a series of tweets, the ministry distanced the minister from allegations of embezzlement.

Thread by @FMHDSD: HM @Sadiya_farouq DISTANCES SELF FROM DIVERTED SCHOOL FEEDING FUNDS @FMHDSD wishes to dissociate itself from a trending report in the media titled “N2.72b for School Feeding During Lockdown Divert…… https://t.co/iDpSZRZT8m

The ministry said: “preliminary investigation had indicated that part of the N2.67billion was diverted to private accounts. It also revealed that over N2.5 billion was misappropriated by a senior civil servant (name withheld) in the ministry of agriculture and now deceased, for himself and cronies”.

It added: “The statement by ICPC was twisted and misinterpreted by mischief makers and directed at the Ministry of Humanitarian Affairs.”
“The Ministry of Humanitarian Affairs, Disaster Management and Social Development hereby inform the public that the Federal Government Colleges school feeding in question is different from the Home Grown School Feeding which is one of its Social Investment Programmes.”

The Ministry of Humanitarian Affairs, Disaster Management and Social Development described those casting aspersions on the Minister Sadiya Umar Farouq as malicious and unfair and calls on The Independent Corrupt Practices and Other Related Offences Commission, ICPC to publish the names of persons, federal colleges and school heads whose names have been found to be associated with the missing funds and also freeze the accounts where the said funds were diverted.

Many people have raised the question of how the money was misappropriated, and are looking for more information considering that this is not the first time such allegations have been made.

Others are still dissatisfied with the response of the Ministry of Humanitarian Affairs and Minister Sadiya, saying that the ministry has to disclose the names of the primary schools it said it spent money on during the Coronavirus lockdown.

Then there are those who are asking questions on how the Buhari led administration fights corruption.

“124,589 households fed in Lagos, Ogun and FCT in the Home Grown School Feeding Programme between May and July during the lockdown

124,589 households fed in Lagos, Ogun and FCT in the Home Grown School Feeding Programme between May and July during lockdown

There is rice in Kano

The alleged misappropriated fund is just a fraction of the money the government says it spent on feeding students during the coronavirus Pandemic lockdown.

Earlier, the government said it had spent about 523.3 million Naira on school feeding during the coronavirus pandemic.

Sadiya Farouk said each bowl size was assessed at N4,200 after a thorough consultation.

At the same time, she said the decision was based on estimates from the National Bureau of Statistics and the Central Bank of Nigeria.

Sadiya Faruk said that to ensure that everything is done in a fair and honest manner, they partnered with the World Food Program as professional partners.

In addition to anti-corruption agencies such as the EFCC, ICPC and the DSS security agency as well as other organizations to monitor the implementation of the program.

Therefore, uncovering this scandal about the diversion of a portion of Nigeria’s spending is disturbing and confusing.