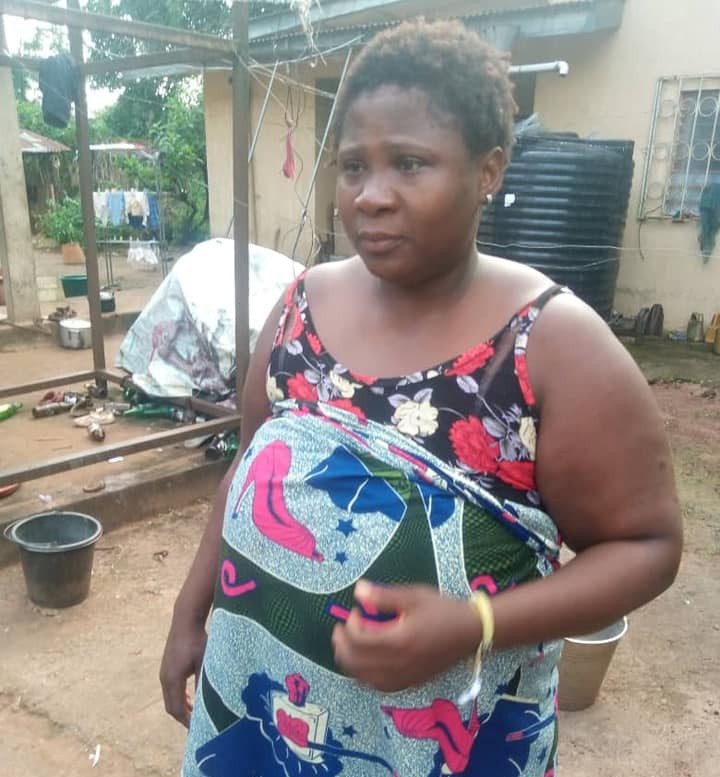 A couple whose names were given as Ogochukwu Anichukwu (wife) and Emmanuel Anichukwu (husband), has been reported to the Human Rights Legal Initiative in Anambra State for allegedly assaulting their house-help.

According to reports, the woman poured boiled water on the girl for allegedly licking milk meant for her child.

It was gathered that Mrs Anichukwu and her husband are fond of maltreating the 8-year-old girl who lived with them as a house-help. Reports from residents in the area confirmed that the girl was flogged mercilessly, adding that the couple has been starving her for a while, to the extent the girl sometimes eat sand because of starvation.

However, Mrs Anichukwu and her husband have been dragged to the human right legal initiative in Ekwulobia, following the recent injury inflicted on the young girl.

A Facebook user, Jane Iyke, who shared their photos on the social media wrote; “This case is before Human right legal initiative Ekwulobia Anambra State already but if you know this girl Mma from Awgu Enugu State, kindly advise the family to come and pick their child before they bring her back in a corpse.”

“This child is living with Mrs Ogochukwu Anichukwu from Ndikelionwu and Mr Emmanuel Anichukwu from Enugu State as a househelp in Nanka Anambra state. This girl’s offence was that she licked the milk meant for her baby, she poured hot water on her and locked her inside so that neighbours won’t see her in that state.”

The neighbours confirmed to have seen the girl eating sand severally because of starvation. She’s now used to flogging which was why the woman used hot water this time.

The neighbour that reported to the Human rights legal aid according to them entered their house unexpectedly and caught Mma trying to run inside to avoid been seen as she was vehemently warned not to allow anyone see her.

Iyke, however, revealed that the girl is now in the hospital for proper medical attention. The poster gave out the contact of the Human right legal Aid initiative as 08166603578, for further inquiries on the incident.

In another news, a 28-year-old man has handed himself to the police after macheting to death his parents, wife and sister-in-law over a land dispute, Naija News reports.