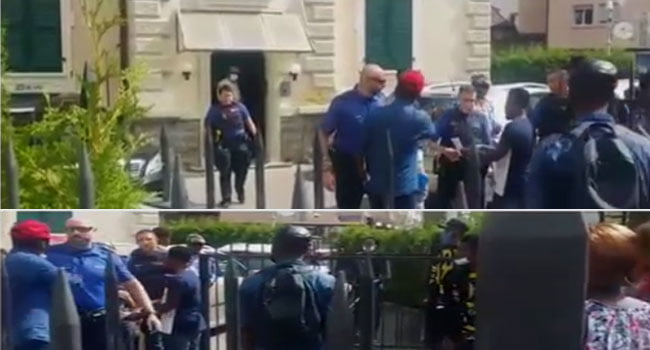 Nigerians in Switzerland identified as  Nigerian Youth Movement of Switzerland, have petitioned the Economic and Financial Crimes Commission (EFCC), Secretary to the Government of the Federation (SGF), and the Ministry of Foreign Affairs over an alleged corrupt practices by officials of the Nigerian Embassy in Bern.

Naija News reports that the group in a petition titled: ‘The Nigerian Embassy in Bern is stinking in corruption’ signed by its youth leader, Irydaer Omobude, urged the federal government led by President Muhammadu Buhari to recall the Ambassador, Baba Madugu and Mrs Kemi Amuda back to Nigeria with immediate effect.

The Nigerian Youth Movement of Switzerland, noted that it had notified the Nigerian embassy in Bern of the dastardly acts in a letter dated 24 January 2020 but regretted that till date, the embassy has not replied to the letter.  It added that instead, the embassy decided to introduce a closed-door policy against the community, calling the Swiss police at random to harass Nigerians from coming to the embassy.

Nigerians in Switzerland further regretted that majority of the Nigerian community has lost confidence in the embassy.

The petition reads as thus; “The embassy in Bern under Ambassador Baba Madugu uses the swiss police to intimidate, threaten, coarse, and violently remove Nigerians on appointment at the embassy whenever they request for passport or other services which they paid for”

“Many contracts and purchases are highly inflated with the active participation of third parties.”

“Ambassador Baba Madugu met a united Nigerian community in Switzerland. Since his arrival, he has used a crude divide and rule tactics to turn Nigerians against each other”

“Our first petition letter of 24th January 2020 sent to you His Excellency, through the embassy in Bern has landed onto deaf ears. Till date, we are yet to receive any response to that enact”

“Apart from their remittances to the Nigerian economy that runs into USD Billions yearly, many Nigerians living in Switzerland have thriving businesses in Nigeria that pay taxes to the Federal Government as at when due”

“Based on the above facts, we the Nigerian Youth Movement of Switzerland do hereby officially demand the following

“We equally request the relevant and competent organs of the Federal government of Nigeria, the EFCC or the lCPC and others to immediately launch a proper investigation on these allegations and”

“It is our informed opinion that these alleged corrupt practices of officers of the Nigerian embassy in Bern go contrary to the policy of the Federal Government of Nigeria in fighting corruption. This is even worse at a period that Nigeria has officially been declared the poverty capital of the world with major youth unemployment rate”

“Instead, it has decided to introduce a closed-door policy against the community, calling the Swiss police at random to harass Nigerians from coming to the embassy. The majority of Nigerian community has lost confidence in the embassy”

“At this Juncture, we want to reiterate that we do not claim any status of whistleblowers and as such do not request any percentage of the monies recovered from defaulting officers. Instead, the monies should be dedicated to creating employment to the booming Nigerian youth in Nigeria”

“There are a lot of measures available to seek justice in the current situation. We have chosen this official civic and peaceful option in the hope that the authorities will take it seriously and do the needful.”