The Osun State Governor, Adegboyeaga Oyetola,  has been petitioned to dethrone traditional ruler, Oluwo of Iwo, Oba Abdulrasheed Akanbi, for allegedly engaging in acts that are unexpected of a monarch.

In a letter dated September 9, 13 chiefs under the under the aegis of the Concerned Kingmakers of Iwoland, made their reasons known, while clamouring for his removal.

The letter was made available today, and was titled: Petition for the removal of Oba Adewale Akanbi (Oluwo of Iwo) from the throne of Iwoland”

In the letter addressed to the governor and signed by the 13 kingmakers led by Chief Olurunlampe, the chiefs said Akanbi is not fit to continue to occupy the throne as he was an ex-convict in Canada and the United States of America.

They said in 2016, when he was enthroned, the king went ahead to name himself as “Emperor” a term which was alien to Iwo’s history.

They added that in July same year, the royal father stirred another controversy when he declared that all Yoruba men were entitled to the stool of the Ooni of Ife.

The chief further accused him of fighting with some notable personalities including the Agboowu of Ogbaagba at a peace meeting presided over by Assistant Inspector-General of Police, Zone XI.

“Oba Adewale Akanbi has penchant for fighting notable personalities within and outside Iwoland . At the moment , Oba Adewale fought Chief Abiola Ogundokun , Imran Adio , (a leading Islamic cleric ) whom he removed as Otun Ajanasi. He insulted the Alaafin of Oyo, Oba Lamidi Adeyemi ; Ooni of Ife , Oba Adeyeye Ogunwusi ; Orangun of Ila, and other prominent Obas in the state,” the petition added.

See photos of the letter below: 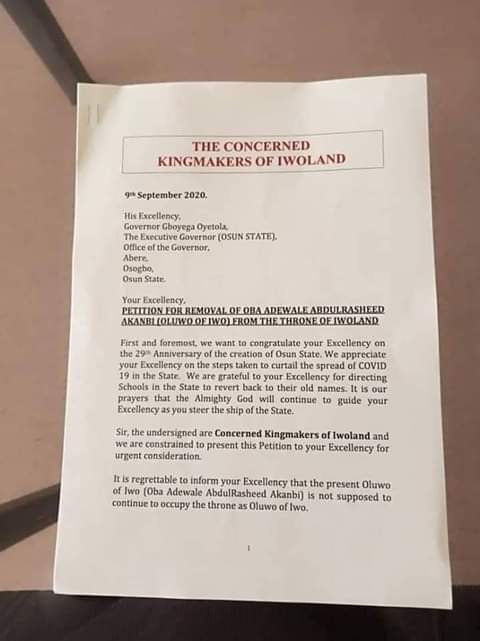 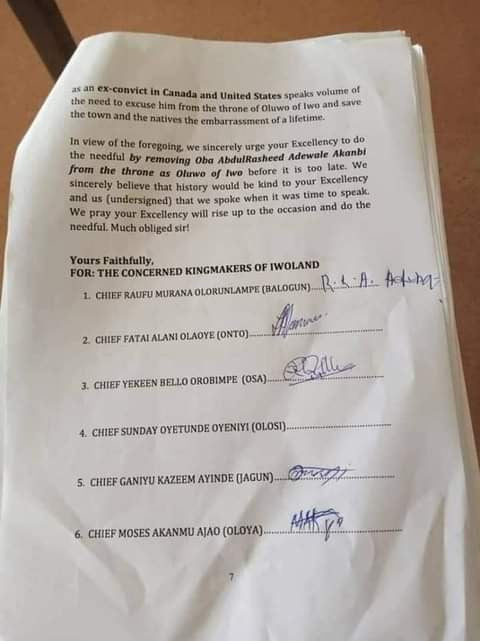 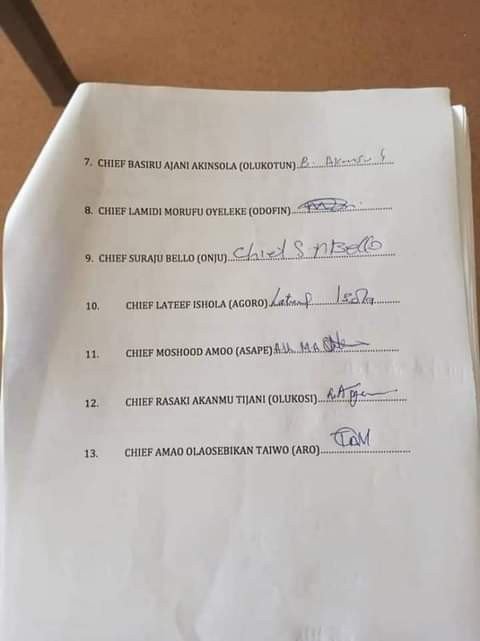