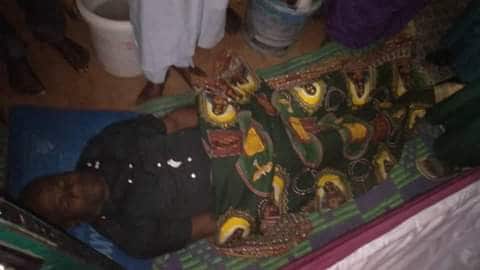 A heavily pregnant woman has been reportedly kidnapped by yet to be identified gunmen in Nasarawa State.

Reports had it that the armed men on Monday, September 21, raided Kana, a community in Nasarawa LGA where they killed a young man whose name is given as Emmanuel and abducted 10 others including the pregnant woman.

According to the spokesman of the State Police Command, ASP Ramhan Nansel, who confirmed the incident to newsmen, they are still gathering evidence on the event as they are yet to know the whereabouts of the gunmen.

Reacting to the incident on Tuesday, September 22, Chairman of Nasarawa Local Government, Mohammed Sani Ottos, disclosed that the kidnappers came from the Kana hill and went back through the same route.

According to Ottos, the hill stretched from Kana to Maraba Udege, Onda, Agwada, Nasarawa Eggon to Wamba towns and beyond to other states. He revealed further that the gunmen stormed the town of kana town on Monday night and chased away residents as they shoot sporadically.

“At the end of their operation, we discovered that one person was killed, 10 were kidnapped while several people sustained various degrees of injuries. I was there myself to ascertain the level of damage caused by the gunmen and I condemned the act, I visited the town to sympathise with the families of the slain, abducted and injured victims,” Ottos noted.

“I commend the Guards Brigade 177 Battalion, Keffi who accompanied me to further build the villager’s confidence and pledged to do all within their reach for the safe return of the captives,” the chairman added.

Naija News gathered that his Royal Highness, Alh Halilu Bala Usman Osu of Ajiri Afo of Udege chiefdom along side His Royal Highness Alh Abubakar Sadiq Obagu the Osu of Agwada, on Wednesday morning, September 23, paid a condolence visit to the people of Kana Community over the death of Emmanuel.

The Royal fathers reportedly used the medium to pray for the departed soul to continue to rest in peace, while assuring residents of Kana Nasarawa of their total support to ensure that peace return to the community.