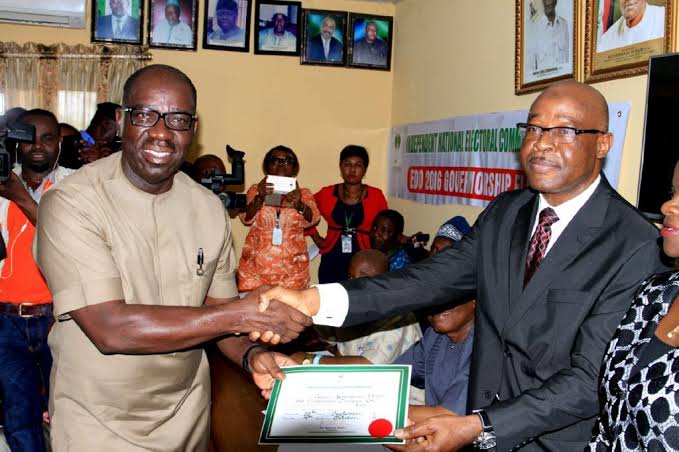 A certificate of return thas been presented by the  Independent National Electoral Commission (INEC) to Godwin Obaseki as the elected governor of Edo state.

Obaseki and Philip Shaibu, his deputy, both of whom contested in the state governorship election under the Peoples Democratic Party (PDP) were presented with the certificate in Edo today.

Obaseki was declared by the Commission as winner of the Saturday poll, after he got the highest votes. 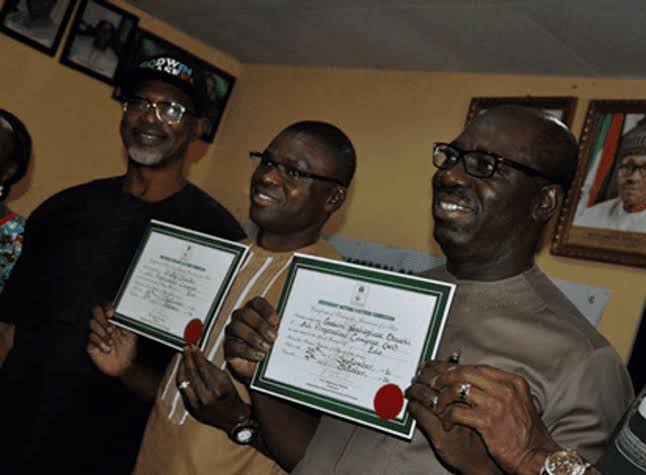 While presenting the certificate of return to Obaseki, May Agbamuche-Mbu, INEC south-south national commissioner said Obaseki fulfilled all the constitutional requirements to emerge winner of the election.

The PDP candidate, who will begin his second term in office in November, 2020, won in 13 LGAs while Ize-Iyamu won in five.

However, Ize-Iyamu is yet to accept the result though.

READ ALSO  2023: Oshiomhole Planning To Run With A Northerner - Idahosa

He hinted at challenging the outcome in court, saying his supporters were disenfranchised.

However, his party has since accepted the results, while admonishing Osagie Ize-Iyamu to congratulate Obaseki.

Also his Godfather, the Former National Chairman of the All Progressives Congress, Adams Oshiomhole and the Chairman of the party’s National Campaign Council for the Edo election, Governor Abdullahi Ganduje are yet to make any comment