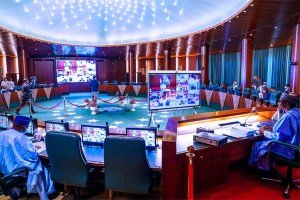 The group managing director of the Nigerian National Petroleum Corporation (NNPC), Mr Mele Kyari has raised a fresh allegation against the cabals in the presidency of embezzlement of over ten trillion naira in fourteen good years.

Speaking during a Hausa programme on Liberty FM, Kaduna on Sunday, Kyari said subsidy was removed because it was characterised by fraudulent activities.

He explained that fuel subsidy was not beneficial to the masses who are the original target beneficiaries, therefore the federal government removed it with a plan to reinvest on projects that will have a direct impact on the masses.

“The crude oil is a global commodity and its price is not hidden, everyone can calculate and know how much is the cost of every final product from the crude at the international market. But, since the inception of oil importation, the government has been paying subsidy on petrol to make it cheaper for Nigerians to buy below the cost price,” Kyari said.

Speaking further that he stated the masses of Nigeria that were enjoying this subsidy, except some members of a cabal, who are rich and powerful.

“It was not the masses of Nigeria that were enjoying this subsidy, except some members of a cabal, who are rich and powerful. They were enriching themselves with the subsidy money at the detriment of the masses who were the primary target.”

However, in another recent development from Mail, The leader of the Sahel state’s ruling military junta has announced Mali’s former defence minister Ba N’Daou as president of a new transition government.

This the Junta announces on national television, today, while stating that the new president will rule in the country for several months until they pass leadership to civilians.