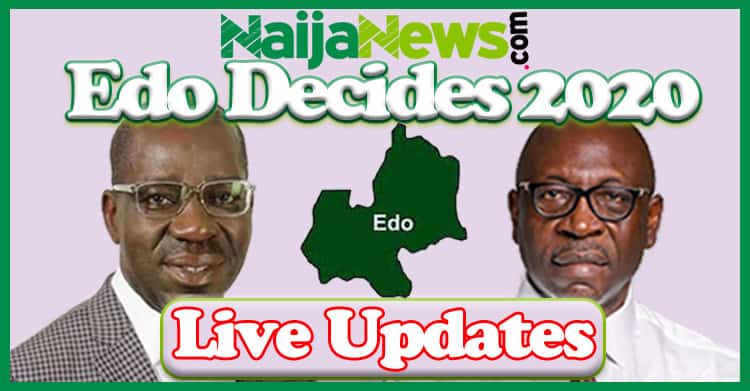 The 2020 Edo State Governorship Election (#EdoDecides2020) holds today, 19 September 2020 and Edo electorates will decide who occupies the Dennies Osadebay Government House for the next four years.

From Edo South to Edo Central right down to Edo North electorates would troop out today to elect the individual they can trust to pilot the affairs of the state until 2024.

Candidates and their agents will struggle to outsmart their opponents in Benin, Ekpoma, Ubiaja, Etsako East, Etsako West, Etsako Central Akoko-Edo, Owan amongst other places.

Though many candidates will be vying for the number one seat in the state, the race is majorly between the candidates of the All Progressives Congress (APC) Pastor Osagie Ize-Iyamu and the incumbent governor of the State, Godwin Nogheghase Obaseki of the Peoples Democratic Party (PDP).

Accusations and counter-accusation have trailed the build-up to the Edo election with many vested interests but the Independent National Electoral Commission (INEC) has insisted on conducting a free and fair election.

Many see the Edo State Governorship Election as a litmus test or a determinant on how the 2023 general election would look like.

Stick to Naija News by refreshing this page for the latest updates in the 2020 Edo State Governorship Election.

11:45: the Peoples Democratic Party (PDP) candidate in the ongoing gubernatorial election in Edo, Godwin Obaseki, has cast his vote.

11:00 The Former National Chairman, of the All Progressive Congress party, Adams Oshiomhole has voted at his polling unit: 01, Ward 10, Iramoh.

Voting is going on smoothly in this unit.

An APC agent was seen sharing tickets to voters after exercising their franchise as they communicate in their indigenous language which I barely understand. There’s no compliance with COVID 19 guidelines in this polling Unit.

The scene is becoming rowdy.

Voting is yet to commence in this polling unit. An INEC official said the delay was because of the absence of security officers at the unit. She said they contacted the appropriate quarters but the security officers promised them were yet to arrive.

Some security officers finally arrived in a bus at 9:50 a.m and voting is now set to begin. Some private security guards were also noticed at the voting centre. But they had been instructed to leave the area by the police as of 10:04 a.m.

9:35 AM. Igueben LGA, Edo Central, PU:002 IGUEBEN-Uhe RA: 04 (Uhe/Udimogbo) Voting exercise has began. The gathering is devoid of physical distancing which is not in line with Covid-19 elections protocol.

9:32 AM At unit 5, Olo motor park, Ward 2, Ikpoba-Okha local government, accreditation has begun. In fact, the environment is serene as the voters are observing the Covid-19 protocols.

09:30: The governorship candidate of the APC in Edo State, Pastor Osagie Ize-Iyamu, has casted his vote.

Iyamu who expressed confidence that he would win the election voted at at polling unit 26, ward 5 in Iguododo community, Orionhwon Local Government Area.

09:30 AM: Ward 6, Unit 2 Orhionmwon local government. The INEC official announced to the electorate that the elderly can choose a voter of his/her choice to help him/her cast their vote.

09:17 AM at PU 02, Blessed Assurance Nur/Pri School, Ogida ward, Egor LG, the election is ongoing. Social distancing is not being observed as electorates are clustered together. Preferences are given to elderly ones.

09:12 AM The first electorate cast his vote at Ward 6, PU2, Orhionmwon local government.

The A.P.O arranged electorate to observe social distancing. Hand sanitizer is being used for the electorate and voters without proper face mask are not allowed to vote.

8:56 AM,the of Unit 2, Ward 4 Aduwawa, Ikpoba-Okha local government, introduces himself and his colleagues to the voters and provides sensitive instructions to them as they get set to cast their votes.

8: 41 AM, PU 7 Ward 2 Okokpon OVIA SOUTH WEST LGA, the APO is sanitised the voters’ hands before proceeding to vote.

8:35 AM, Voting Point 1 PU 07 Ward 2 Okokpon P/S school, as voting is starting, the assistant presiding officer is giving instructions on Covid 19 regulations and there is general practice of social distancing. There is also hand sanitizer and the wearing of face mask is made compulsory, without it there is no voting.

8:26, PU 8 Ward 2 Okpon Ovia South West Local Government, the presiding officer is seen complaining about a lack of chairs for the officers to work, even though the electorates are already coming around.
8:23 AM PU 03 Ward 5 Owan East LGA, party agent confirming the ballot papers, they are trying to know the figures.
8:17 AM Ward 2, Unit 7, Etsako West LGA.

Thermometer for this unit is not working. Voters are already at the ex venue waiting for the commencement of this exercise.

The dispute between APC members and an electoral officer they alleged to be a PDP member has now been settled with intervention of the police. There is calm and voters are gathering. Electoral officers are still setting up materials.

INEC officials cleaning some prints off the ballot box. They refused to let the observer see what it is. all about.

People still checking their names on the voters’ list. Some complained about their names missing and showed this reporter their voter’s cards.

Voters have formed a queue without observing social distancing.

Election materials and adhoc staff are yet to arrive at polling units. Security officials and voters are hanging around outside.

The electoral officers are preparing election materials, voters are checking the pasted voters’ registration list.However, presiding officers are still having problem with operating the infrared thermometer meant for testing the temperature of voters.

Voters are waiting for voting materials without observing social distancing.

Election materials and adhoc staff are yet to arrive at the polling unit. Voters are waiting

The situation is calm as voters anticipate the commencement of the voting process. However, there is no adherence to the COVID-19 regulations whatsoever.

Voting unit of Muhammed Kadri, the councillor of the area. Chairs arranged for voters and officials said voting starts at 8:30.

Electoral officers are setting up electoral materials, as voters are turning out early.

INEC adhoc staff are still setting up things at the polling units.

07:40 AM: Voting is expected to commence by 8 a.m. across all polling units in the state.

Voters are getting ready for accreditation while INEC officials are doing an orientation on how to vote with all materials ready. Social distancing not being observed.

INEC officials getting ready for the election process with security officers on standby.

07:25 AM: Ward 1 PU 4 (Oba’s Palace) Oredo LGA: Some voters are spotted at the scene of the election, waiting for INEC officials ahead of poll opening at 8 a.m.

Some voters are seen removing banners as they are not expected to be seen at the polling unit.

INEC officials and election materials are set for distribution in a train of buses to the various polling units in the two wards.

INEC ad-hoc staff have arrived and are setting up non-sensitive election materials in preparation for voting.

Officials pasting lists of valid registrations as voters check for their names on the list.

As at 7:08 AM, ESAN Southeast LGA, at Ubiaja, men of the Nigerian Army are restricting vehicle movements.

Further information gathered revealed that there are three checkpoints along the council secretariat that leads to the INEC LG office.

6:38 AM: Police officers are currently being briefed at the Igueben Police Station, Igueben.